The daily surrealism of war is a subject that has inspired some fine literary and artistic works. Ben Brody’s photobook deserves a place among them.

Attention Servicemember is a wry look at the war machine, the way images are used to shape and undermine perception, and the lasting personal impact war has on those who serve. It is based on Brody’s experiences over 12 years, first as an Army combat photographer in Iraq and then as an independent photojournalist covering Afghanistan.

Brody brings an appropriately surreal background to the project. At the age of 22, he had dropped out of college “to learn photography and sell cannabis to art students.” It was 2002, and when the United States invaded Iraq, Brody resolved to photograph the war. He thought (mistakenly, as he eventually discovered) that it would be a pivotal moment for his generation, like the Viet Nam war had been for an earlier generation. So he enlisted as a combat photographer, did two tours in Iraq, and then returned to war in Afghanistan as a civilian photojournalist. He even managed to earn his MFA on the GI Bill, in part by doing “independent studies” from Afghanistan.

The book, which is designed in the style of a military field manual, instructs readers in the absurd, mundane, surreal, and deadly realities of life in a war zone. It also offers an insider’s view of the contentious but symbiotic partnership between the military and the media.

Brody sets an ominous tone by beginning and ending the book with several pages of stark black-and-white images — not of war, but of domestic life in America. Shots of backyard tree limbs . . . a child’s tantrum . . . two men wrestling in a suburban park . . . There’s menace in what should be tranquil small-town life, the residue of his years at war. As Brody explains, “After long periods in war zones, being shot at and blown up starts to feel normal. When you get home, you feel crazy for a while, because no one is trying to kill you. That feeling fades quickly, but I still see the tactical geometry of any room I’m in. I also see war at the gas pump, war in the choices that people make who consider themselves peaceful, war in our drug use, war in our economic system, war in our collective anxieties.”

In between the introductory and closing black-and-white images, Brody’s color photos cover his time in the Middle East. At first it seems to be a random collection of images. Shots of quotidian daily life from mess hall to yard . . . soldiers on patrol . . . battle scenes . . . incongruities like a soldier in full battle gear standing inside a well-kept Iraqi home, aiming his rifle up a stairway festively decorated with garlands. There are also glossy pages from sanctioned war-zone publications like The Warrior and The Dog Face Daily, and field-manual illustrations of fighting techniques. All together, the seemingly haphazard collection captures the arbitrary reality of daily life in a war zone.

Interspersed are essays by Brody about his experiences. Brody is a strong writer with a simple, straightforward style and a gift for short but vivid descriptions that capture the absurdities and contradictions he saw and the challenges he faced.

Brody describes his struggles with moving beyond the manufactured views sanctioned by the powers that be, as well as the preconceived notions of the public about our proud men and women in uniform. As a combat photographer, his superiors wanted photographs that justified the war’s existence and exaggerated its accomplishments — “Soldiers looking calm or stoic. Yes. Soldiers looking angry or frightened or exhausted or confused or lost with eyes like the bottom of the ocean. No.” As a civilian photojournalist, there were similar barriers to circumvent. Coveted “embed” assignments usually went to those with a track record for taking positive imagery, and photojournalists were often required to travel with an “escort” to contain their coverage.

It’s a problem that resonated with Brody: “I thought constantly about his complaint and how I might visually communicate the war in a way that confronted the false narratives people construct for themselves when they look at images.”

Attention Servicemember is Brody’s answer. He has succeeded in presenting an unsettling look at the absurdities, the danger, and the struggle to rise above the stereotypes and propaganda of war.

A postscript: A week after his encounter with the young sergeant, Brody writes, he saw the sergeant again. He was being loaded into a medevac helicopter, “his left foot missing and his right leg shattered. His left arm was gone below the elbow, and he held a gauze-wrapped stump in the air . . . ”

Brody did not take his picture. 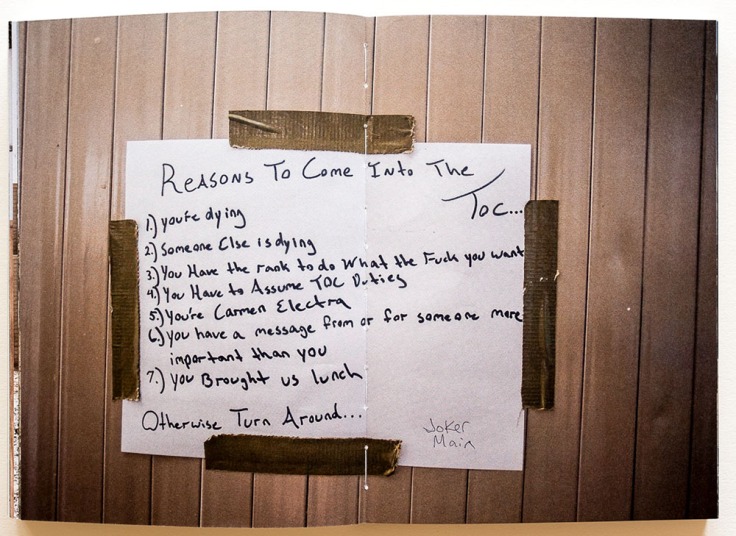