In Imaginary Meetings, the eight year retrospective of the young Finnish photographer  Riitta Paivalainen, I have found some very delightful and thoughtful conceptual photographs. This book is an accumulation of a number of projects that Paivalainen has created, building on a similar theme utilizing similar subjects, advancing her ideas and concepts.

She creates site-specific sculptures utilizing second-hand clothing from flea markets and thrift shops as found objects, and then records the fleeting sculptures with suburb color photographs. Her work is similar in emotion content to that of the British sculpture Andy Goldsworthy. In contrast to Goldsworthy’s utilization of the found natural materials of stone, rock and sticks, Paivalainen introduces a man-made element that speaks both directly and indirectly to the presence of humanity.

The used clothes are symbols and evidence of the past, unknown people and their stories, memories and dreams. These symbols are installed in the natural landscape, in which there is no other presence of mankind, creating an abstract interplay and dialog between mankind and nature. The clothing is arranged either in familiar shapes or abstract patterns within the landscape, although she will sometime extract these sculptures out of this natural context.

During her initial Ice project, occurring in the middle of a Finnish winter, she soaked and then formed the clothing as it quickly froze, animating the sculptured clothing. For this project she also utilized the flat overcast lighting to eliminate shadows, allowing the ghostly sculptures to float and hover over the landscape. During her Ice project, she encountered another unpredictable natural element, the wind, which led to yet another series of experimental clothing-site sculptures. This has in turn led to a continuing series of investigations into the interplay and conversations between nature and mankind.

In the essay provided by Andrea Holzherr, she states about Paivalainen’s work:

Each of her installations, with a “setting” (the landscapes), “actors” (clothing), and “atmosphere” (light), is carefully prepared. However, in working in natural elements, Paivalainen is also open to the accidental, the unforeseen, and surprise. By using photographs instead of the installation as the final work of art, Paivalainen is able to choose the exact frame and moment she is looking for and in so doing, maintains control over the decision as to what she includes and what she leaves out.

Another important component in Paivalainen’s photographic approach is the notion of evidence. She uses the viewer’s likely perception of photographic images – as copies, records, or documents of reality – in order to give substance to her “imaginary histories”.  In her pictures she creates worlds in which reality and authenticity are closely intertwined with her own fictions.

Her photographs capture a dream-like beauty that has both energy and space. The earth is usually still and grounded, sharply delineated, creating a strong and lasting presence. Meanwhile the clothing is light and fragile, transitory and fleeting, much like a good conversation or a memory of the past. I find a magical quality in her body of work.

Andy Goldsworthy, in discussing land-art scupltures in the natural landscape, has stated “Nature can be harsh – difficult and brutal, as well as beautiful”. I find that these words are equally applicable to the artistic work of Paivalainen and her imaginary tales, dialogs and stories about a “forgotten history”. 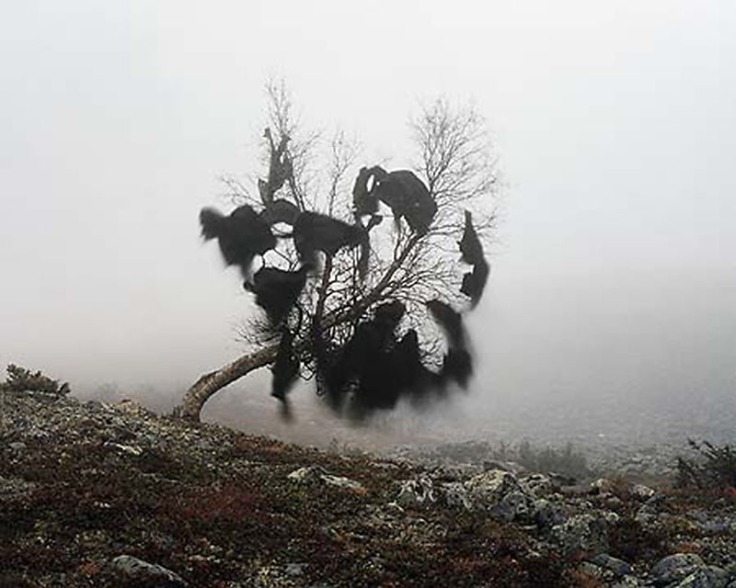