Notes: As a child raised on her American grandmother’s stories of moving to China in the early 1920s who then followed in those footsteps with a post-college English teaching job, to say this reviewer was eager to get her hands on a copy of MAGNUM China would be a major understatement. Having arrived just a few months prior to what became the Tiananmen Square demonstrations, I left abruptly on the first passenger flight out in early June 1989 and have not returned since.  China has remained, in my mind and in my dreams, an unresolved puzzle, left yet to be finished on the kitchen table, as if one got up to answer the phone and never came back. Thus I turn the pages of MAGNUM China with hopes of finding all the missing pieces

Like the country itself, the photobook MAGNUM China, is an impressive thing to behold, one that will demand revisiting time and time again in order to take in the full scope of its riches. Featuring the high caliber of imagery that one can reasonably expect for any Magnum publication, this 376 page book includes work of more than 25 of the world’s best photographers, spanning 80 years, from 1938 to 2017.

In fact, as is noted in the section featuring Robert Capa’s 1938 documentary work in Hankou, the language barriers and surveillance challenges he faced provided Capa the time to contemplate not only his own work as a photographer, but to develop the idea of a collective of photographers that would become Magnum. This became the premiere photo agency founded by Capa and Henri Cartier-Bresson, among others, in 1947. Thus the argument could be made that without China there might not have been a Magnum, and without Magnum, there would be a less historically significant and culturally influential record by which the world can understand China, and China can understand itself.

The introductory “conversation” between China based photo Editor and Curator Zheng Ziyu and the English writer and photographer Colin Pantall offers insight not only to the selection of images that follow, but also to the shifting perception of China. Once considered an exotic/closed off society rarely seen by Westerners, today’s understanding of China is a more nuanced portrayal in which Chinese photographers, writers, and historians have more authorship over their own story.

MAGNUM China is divided into four sections: A Time of War 1938-1949; The Mao Zedong Years 1950-1976; The Deng Xiaoping Years 1977-1992; and The Era of a Global Superpower 1993- present.  Each section begins with an informative multi-page introduction by Jonathan Fenby which provide context to the images that follow; a timeline of significant political and cultural events during that period, and a list of in country travels for the photographers, a sampling of whose work is then presented.

It is tempting to gorge on all the finely printed photographs in one sitting. However, like an all you can eat image buffet, a bit of pacing and restraint is advised. There is much to satisfy the hungry viewer’s appetite, such as the late 1940s work of Henri Cartier Bresson, the gorgeous color work of Eve Arnold’s sympathetic portraits of the late 1970s, and the confection of Martin Parr’s commissioned portraits of the nouveau riche of 21stCentury Hong Kong. However, it is well worth pausing between courses, to digest the work of each photographer, and read the text for an understanding of their unique relationships to this vast and complicated country. Learning when they first visited China, how often they went, what their impressions were, which publications (if any) they were shooting for, enriches one’s appreciation for the subjects these world class photographers chose (and did not choose) to focus on.

The first section “A Time of War” has the most limited range of work, just that of Robert Capa and Henri Cartier Bresson, due to difficulty of travel and access in the pre-communist era of the late 1930’s-40’s. Here you will see Capa’s work for LIFE magazine, depicting a China still battling Japanese invasion, and Cartier-Bresson’s late 1940’s documentation of the fall of the ruling Kuomintang and the subsequent victory of Mao Zedong’s invading army. Especially moving is the image of “A bewildered old man searching for his son…” as the new recruits are called up and marched off to a certain defeat. The worried man in his black hooded robe tugs on his long white beard, his shadow stretching out behind him to the young soldiers who smile in the background, both the old and new era unaware they will soon be obliviated by the advance of the Communists.

One of the joys of this book is the inclusion of layouts from magazines that first published these images. The reader is able to thus experience how Western audiences first saw what this historically closed society looked like.

The second section “China, 1950-1970” includes not only the fine work of Werner Bischof’s Hong Kong series of shanty towns and growing skyline from the early 1950s, the observation of humanity in Marc Riboud’s first trip to China in 1956 at the dawn of the Cultural Revolution, and the early years of China’s re-engagement with the outside world as shown in the 1973 photographs of Bruno Barbey, among others. Also included is ephemera such as Riboud’s press pass and Bischof’s wrinkled caption list for his series The End of the Road. One can feel the impact of the typewriter keys hitting the page before being sent off to the Magnum office in Paris, giving the viewer the sense of being not only in the midst of China’s momentous changes, but in the mind of the photographer as they documented them. Pity there was no way to include the short 16mm films shot by Swiss photographer Rene Burri, though his early work (his was a 30 year “love affair” with China) is nicely represented with his photographs of young pioneers marching in the snow, and dead lotus flowers reflected on a lake that evokes the modernist line drawings of Picasso.

Of particular interest to this reviewer are the photographs in the third section, “The Deng Xiaoping Years, 1977-1992” as they include glimpses of the China familiar to visitors of the post cultural revolution/pre Tiananmen era, a vast society on the cusp of great, though not always comfortable, change. Of equal interest is the inclusion (at last!) of the work of two female photographers, Inge Morath and Eve Arnold, hinting that it was not only China that was opening itself up, albeit ever so cautiously, to the outside world. Perhaps Magnum too was expanding itself to welcome new perspectives; however limited the opportunities, they were long overdue.

Inge Morath’s work from the late 1970s offers fresh, “optimistic” view of everyday life, be it the 6:30am bicycle commuters passing through the dappled light of a roadside tree, or soldiers seated on the mountainside carving of a laughing Buddha, or her husband Arthur Miller directing a 1983 production of his play Death of a Salesman.  Immediately following Ms. Morath’s black and white images comes the saturated tones of reds and greens in Eve Arnold’s well traveled portraits of communes, factory and domestic workers, and farmers on the plains of Mongolia. The text describes the difficulty that Arnold had in photographing common people not yet accustomed to the sight of an independent Western woman, but she “came out of the country with fresh, original and life affirming images” symbolizing the end of tragedies and “changed the way the world viewed China.”

In the early 1980s photographs of Patrick Zachmann, one can begin to feel the presence of the outsider’s gaze and China’s gradual courtship with long forbidden Western influence. Close up faces of average Chinese citizens smile with curiosity back at the camera, actors prepare for film-shoots, young couples waltz in private apartments, and somewhat disturbingly, a bare breasted prostitute sits on a rumpled bedspread, staring directly at the lens, or perhaps the man behind the camera. Subsequent images of modern Chinese culture flaunting their newly acquired bling carry the same troubling impact as this photograph. The prostitute, unlike the old man in Cartier-Bresson’s 1948 image of the old man searching for his son, seems very much aware of the bleakness of her position, and has resigned herself, like her country, to a reality in which the pursuit of money is the new game in town, and everyone is a potential whore.

Despite the quantity and caliber of photographers that covered the Tiananmen Square demonstrations and the brutal crackdown in which “hundreds, perhaps thousands” of peaceful demonstrators, a majority of which were idealistic University students, were killed, MAGNUM China offers surprisingly few pages devoted to this world event. Thankfully included is an image by photographer Abbas which shows the early student gatherings mourning the death of beloved Communist party official Hu Yaobang. For those who know that these gatherings were the start of what became the Tiananmen demonstrations in the weeks preceding the official state visit of Mikail Gorbachev, (thus the world press arrived in Beijing and broadcast an embarrassing political moment that highlighted internal power struggles), this image is an important inclusion in the Portfolio. (Full disclosure, this reviewer had the honor of meeting Abbas on the day this image was taken, and his comment “This feels just like Iran”, referencing the start of the Iranian revolution, sent chills down my spine). The significance of this gathering is not fully conveyed by the placement of Abbas’ image opposite Patrick Zachmann photo of a theatrical student writhing on the ground as she “performs the pain of the Chinese people”. Real people died, brutally, and it was well covered. The avoidance of those images is, to this viewer, the only disappointment of this otherwise magnificent book, and despite the inclusion of Stuart Franklin’s view of the famous “Tank Man” on the wide boulevard leading away from the bloodied square, causes one to reflect on the compromise that countries and cultural entities alike have made in order to continue to do business with and in the economic powerhouse that is now China.

However, in the final section “The Era of a Global Superpower, 1993-present” there are hints that it is not only the photographers (Ian Berry, Stuart Franklin, Jim Goldberg, Chris Steele Perkins, among others) who are conscious of the price China’s citizens have paid for its ascent to the top of the global ladder. So too the editors of MAGNUM China, in their choice of image sequence, make the subtle point that while some Chinese now enjoy luxuries such as fancy cars and amusement parks, others have lost their homes to the development of the Three Gorges Dam.

In a particularly moving series, Taiwanese photographer Chien-Chi Chang documents mental patients who are literally chained together, forcing a level of cooperation that may neither be sincere nor lasting. These haunting black and white images immediately follow Martin Parr’s bold color work focusing on rapacious consumption, which with all Parr’s work, are very strong on their own merit. But taken in as the editors intend, one senses that not everything about China’s great success has been without great cost. Chien-Chi Chang also documents North Korean defectors who must hide their identities from the authorities as well as the camera while traveling through mainland China en route to what they hope is freedom in South Korea. China may have many riches, as beautifully demonstrated throughout this book, but freedom is not yet one of them.

Editor’s note: This photobook was selected as one of the “Interesting Artist and Photographic Books for 2018” by The PhotoBook Journal editorial team. 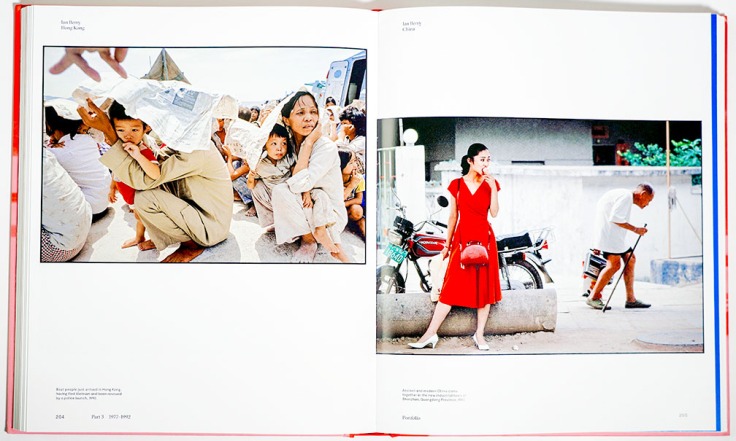 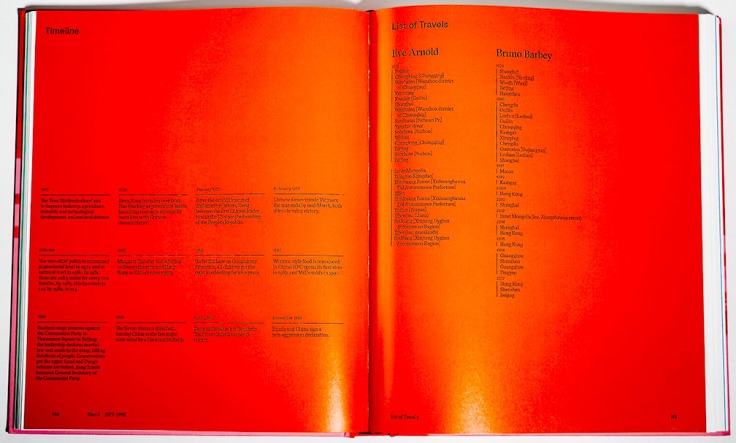