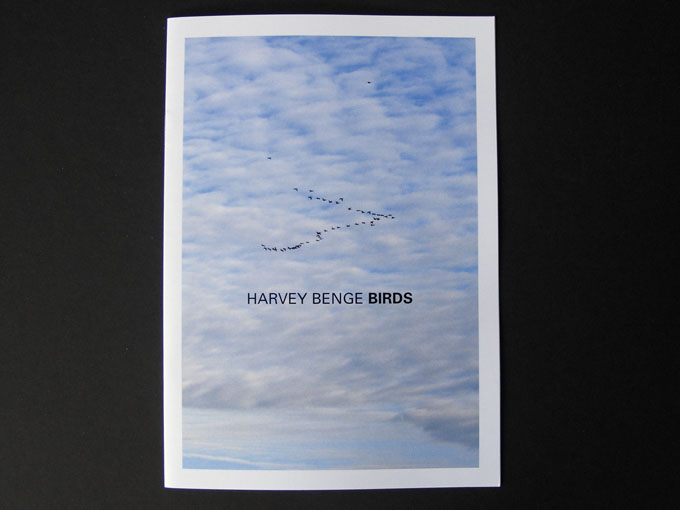 The five color photographs, each of the photographs spanning the two page spread, capture a flock of birds in flight. The identity of the specific bird species remains ambiguous, as the birds are flying far from the photographer who appears to be more interested in the broader perspective of this sky-scape. From the series, we can determine that they fly in a V-shaped pattern and these birds appear to have a profile similar to my memory of US game birds, that of a duck or goose.

Due to the brevity of this photobook, it reads more like a short poem, with a number of interpretative variations. One alternative reading is that this is a narrative about a group of family and friends who are on a “road trip”. They have the freedom to freely move about, living off the land, to literally see the world, soaring through the sky as they are. Wouldn’t it be really nice to have that type of freedom?

This is also a narrative about the social patterns we develop, the sense of culture that becomes instilled in a group of people, the memory of history that becomes ingrained and passed from generation to generation. The birds fly in this pattern for a reason that is probably only really known by them. If they are on a migratory route, it probably is so engrained from an ancient memory so that the need to make this journey is so hard-wired, they may have little to no cognitive choice. Suggesting that the cultural patterns of behavior we have are also being passed from generation to generation.

If indeed these are ducks or geese, we recognize that these birds are also considered game birds, pursued by not only other animals but by the most dangerous of hunters, mankind. Our knowledge of their potential plight provides a bittersweet tinge to this narrative, that these birds may be unknowingly flying towards imminent danger. The same migratory instinct will also take them repeatability near known hunting sites, where men will be lying in wait with shotguns and retriever dogs.B

By no means is the last reading about the abstract patterns that groups of birds and other social animals create, that evolve in real-time. From the infinitive number of variations that is occurring, Benge has selected these five. The dark flecks of birds providing an indistinct but slightly recognizable pattern framed on the background sea of blue, gray and white. The photographs start with a tight and recognizable V pattern, but slowly evolve in the five sequences into an almost straight line. We can recognize that this results as the visual perspective changes relative to the bird’s flight and the position of the ferry that Benge is photographing from. That patterns change, morph and what we may see at one point in time, may not be a good indication of all the possibilities of the design in space. 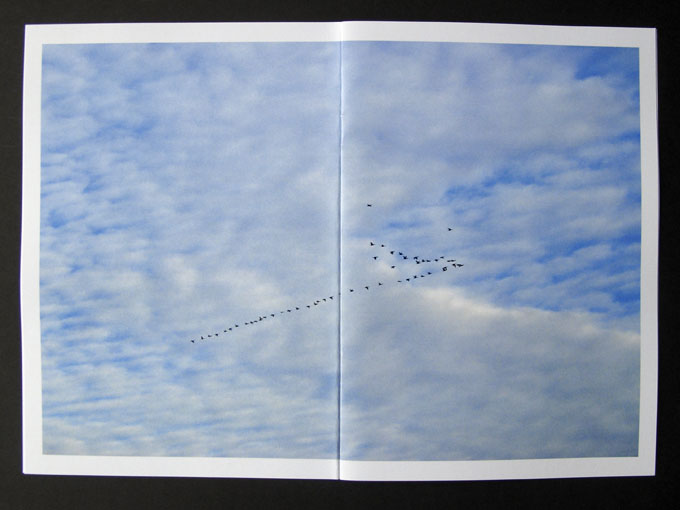