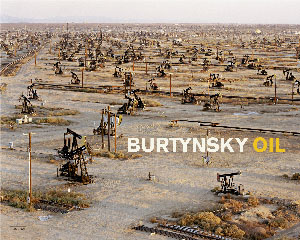 Copyright of Edward Burtynsky, 2009 courtesy of Steidl and photo-eye

Burtynsky utilizes his saturated color landscape photographs to gain access to our inquiring minds. The photographs are too beautiful, elegant and mesmerizing to be rejected at first glance, thus enticing us into his visual narrative. The photographs are at first easily consumed and as the book progresses, the photographs become more ecologically explicit regarding the consequences of mankind’s suboptimal decisions making.

Burtynsky’s Oil  trilogy is composed of the industrial production, subsequent consumption and eventually the haunting debris that remains. A similar environmental call to action has recently been featured by photographers Mitch Epstein, Chris Jordan and David Maisel. Burtynsky’s photographs are also captured in a documentary style, whereas he creates a story that progresses from an aloof and abstract aerial viewpoint to eventually confronting us with a single person and a face.

In his introduction, Burtynsky writes:

When I first started photographing industry it was out of awe at what we as a species were up to. Our achievements became a source of infinite possibilities. But time goes on, and that flush of wonder began to turn. The car that I drove cross-country began to represent not only freedom, but something much more conflicted. I began to think about oil itself; as both the source of energy that makes everything possible, and as a source of dread, for its ongoing endangerment of our habitat.

In the first chapter, Extraction and Refinement, the industrial scale of the production of oil is almost overwhelming; a sea of oil derricks, pumps, pipes and buildings and related infrastructure. Predominantly the photographs are from an aerial perspective with a bird’s-eye viewpoint, as if hovering over the land, capturing the seemingly endless vistas from the elevated point of view. The aerial viewpoint abstracts the industrial sites to wonderful patterns of marks, lines and masses of color. The presence of mankind is either absent or has been minimized.

Photographing in the morning or evening light, the industrial oil fields have a deceiving warm glow. Occasionally he captures the industrial aerial vista with a pastel skyline, but more frequently with a dark and looming sky.

When confronting Consumption, the lead-in photographs are similar to the earlier oil production, now with sweeping urban vistas of city skylines, tangled freeway exchanges and a sea of suburban rooftops. There is still a sense of detachment. His perspective then shifts to an elevated middle ground, documenting large groups of individual participating in motorized events, much like the social events documented by Simon Roberts in We English. It is here that Burtynsky’s ironic vision is subtly revealed, such as capturing a car preparing for the Bonneville Time Trials, decorated by their sponsor, Lucas Oil Products.

Consumption is the driver, which economically encourages and drives the enormous investments and subsequent construction of the industrial infrastructure. If there was not a demand for the resource, then all of the exploitation of the environment would not be occurring. It is also in Consumption that Burtynsky attempts to initiate a personal connection, as there is individual delineation within the larger groups.

Paul Laster, in reviewing this book, states “..the result makes the roadway look like a river and the surrounding streets like irrigation canals in a rural area—but of course, L.A. isn’t farmland. Once your mind readjusts, you see the city for what it is: a massive, energy-consuming metropolis. Ironically, while depicting the world going to hell, Burtynsky captures our descent with extraordinary aesthetic skill.”

In the final chapter, End of Oil, we are confronted with the details of debris and waste, abandoned infrastructure, oil caked and oil soaked, nasty, repulsive, a barren and unusable landscape, a sad and spoiled environment. The view-point and framing is becoming tight, up-close and as we say, personal. The vistas now start with the middle ground view of tire heaps, junk cars and aircraft, engine blocks and recycled parts. These are haunting documents of what remainders of consumption and oil production.

With the details of mothballed military aircraft or piles of junked cars being salvaged for spare parts, we can also further delineate the various components that also owe their existence to the production of oil; fuel, lubrication, tires, plastic components, gaskets, hoses and tubing. Recycling is very good, but not everything can be recycled, such as the growing issue of discarded tires.

Burtynsky concludes with the shipbreaking of the oil freighters in Bangladesh, deconstruction of ships which have outlasted their economic usefulness. In conjunction with the grandeur of these mammoth ships being literally torn apart, he finally introduces a human element. He documents those who toil in this dreadful condition, creating individual environmental portraits of the workers. Burtynsky attempts to create a one on one relationship with an individual person to further humanize the story of Oil, a person we might be able to relate to and who symbolically represents us.

Again, in conclusion from Burtynsky: “These images can be seen as notations by one artist contemplating the world as it is made possible through this vital energy resource and the cumulative effects of industrial evolution.” Though Burtynsky prefers to leave his images open to interpretation, the urgency of the subject of oil pushes him toward advocacy; “We need to pay attention, this is now, and if our head’s in the sand and we don’t think that we have a problem, we better get it out of the sand quick.”

This large-scale book is befitting Burtynsky’s utilization of a large format camera, the epic scale of his project and his even larger scale exhibition prints. The pages almost glow with the deeply saturated colors, with each photograph surrounded by a nice white classical margin. The photographs are crisp, clean and developed with a full color scale. Essays in the afterward are written by Michael Mitchell, William E. Rees and Paul Roth. 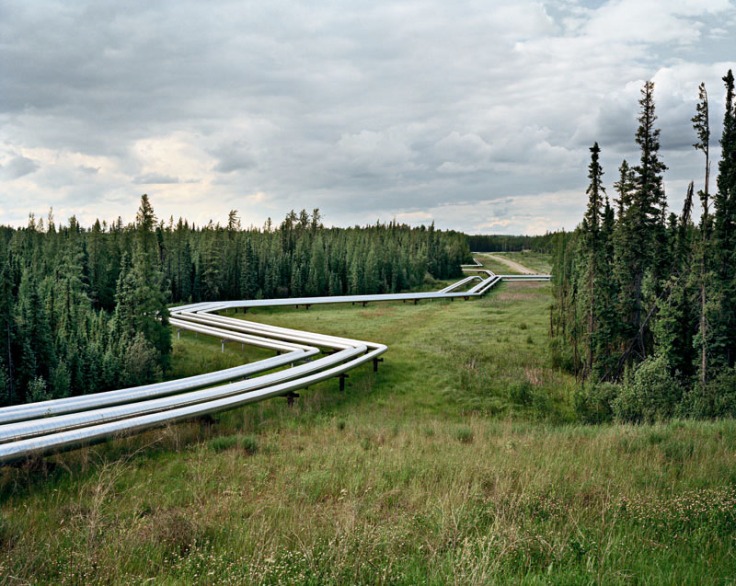