When I received the note from Pierre Bessard regarding his “Corporate” photobook, I was intrigued that his subject was an industrial landscape of a specific facility in China. I was even more impressed with this photobook after I unwrapped it. This was not only a very handsome linen wrapped hardcover book, but elegantly presented in an accompanying linen clamshell box, with a tipped-on image on both the book and clamshell front covers. Not what usually comes to my mind regarding a corporate photobook.

This is more of a commemorative book, in which Bessard was commissioned by the company to document both the workers as well as the facility as the production operation was being relocated to a new facility across the city. The new plant, in the words of the company, was built in order to reduce pollutive emissions and improve efficiency. Thus the old plant was not efficient, but a catacomb of offices and huge amd well-used work spaces.

Bessard was at first concerned about this commission, as he states, “We’ve seen so much work on Chinese factories and their workers where the western conscience wants to portray the subject as alien. What is the point of adding yet another page to a story that has been written so many times before?”

Subsequently upon visiting the site, his perspective changed; “I was immediately taken aback by a setting of cinematic grander. A rigorous geometric composition traced by immense beams, tentacle-like piping and shafts of light pouring through high perched windows.”

The color studies, interspersed with the many head-shot portraits of the workers, create an interesting and wonderful dialog. Are the portraits that face the industrial equipment, in fact those who operated this equipment? Are the women’s portraits facing the photograph of the sea of paperwork, those who cared and tended this flow of documents?

The seriality of the portraits appeals to me, to look at the differences and attempt to discern the similarities. The portraits also appear like those found in a high school yearbook, straight forward, alert and expectant.

I am drawn in by the sculptural shapes and mass of the industrial equipment, building construction and operational infrastructure, reflecting the years of use. The equipment ages much like us, with its individual character becoming more apparent with each passing year. Much as Bill Kouwenhoven writes about Henrik Saxgren’s photographs in Unintended Sculptures;

“..alludes to the readymade, the object trouve, all the art that has flowed forth from Duchamp’s Fountain…his trained eye sizes on the details of our landscapes, on the everyday absurdities or our abandon things and our constructions….an everyday surrealism that delights in the play of light on a man-made structure..”

The result is a unique and collaborative project between a discerning photographer and a corporate sponsor. 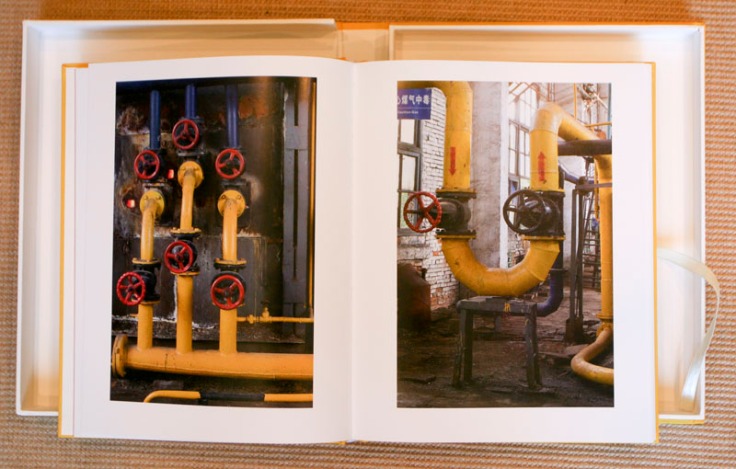