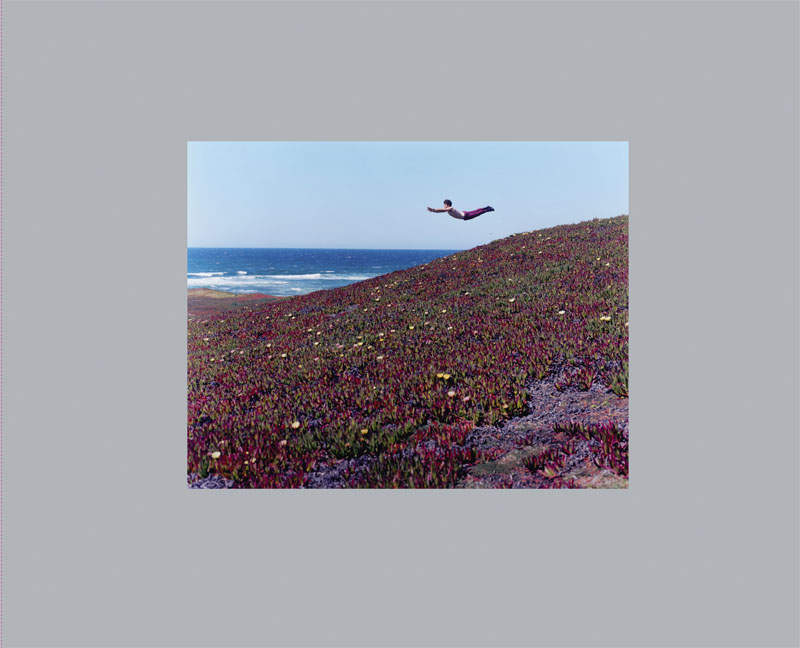 From Flying Pictures by Daniel Gordon, 2009 published by powerHouse Books

Daedalus with his son Icarus had to flee Crete and the solution to their problem was the wings that Daedalus fashioned to allow them to safely fly to freedom. Nevertheless, Daedalus had to admonish his son Icarus to not fly too close to the sun, else the wax will melt, the feathers would fall away and he would surly fall to his death. That man should fly has been a preoccupation for mankind since the early telling of this Greek mythological poem. Flight is also a fascination for Daniel Gordon, who has flown unaided, much like Icarus, ever it be so briefly, as told in his own mythological tale, Flying Pictures.

Gordon’s ephemeral performances are captured with mythical imagination at a brief moment near the apex of his wingless flight. He is seen suspended in the air, in a prone position, arms and legs extended outward. He appears, sans cape, much like the fictional character Superman in flight, performing a similar super feat. We quickly learn that Gordon is actually more like Icarus, although he does not come in close proximity to the sun; he nevertheless quickly experiences earth’s strong gravitational pull and as abruptly plummets back to terra firma.

Gordon has envisioned a life of flight, be it ever so brief, which he documents with a large format camera in partnership with his assistant. He initially pre-visualizes the photograph, setting up the camera and focus, and then positions himself for his “flight”. His assistant times the exposure to coincide with the height and position that has Gordon envisioned creating the planned illusion. Gordon has also chosen to capture his feats within the context of the rural landscape, as though his flight of fancy was a natural as a bird’s flight.

This body of work is a combination of color and black & white photographs. The images are sharp, with an extended depth of field and the color photographs are vibrant. In each of these photographs, Gordon features are sharply delineated, without any blur or appearance of movement. He shares with us that what we see is 1/125th of a second of the duration of his experience, a brief enough exposure to give the impression that he is indeed hovering in the air.  Somewhat like Icarus, Gordon has bare arms as well as shirtless, clad in tights and occasionally shoes, expressing a vulnerability.

I surmise that the black and white photographs were developed during the early phases of this project, as I sense an apparent awkwardness of Gordon’s gestures, both his arms and legs appear to be flailing, grasping in the thin air. In the color work, he appears to be more confident, reflecting a more self-assured prone position. In the few pictures in which we can see his facial features, his expression appears determined, neither smiling nor frowning, as though accomplishing what he has set out to do.

We do not see how he gains his flying height, whether it is from a firm leap off a rock, outcropping, and spring-board or bounce trampoline. Neither do we see his resulting fall, a sudden belly flop impact of or a graceful tuck and roll. By not revealing the ending of the flight, Gordon avoids the metaphoric implications of falling from grace or failure from having aspirations which are too high. Nevertheless, the photographs do hint at a catastrophic fall, perhaps none more so than a black and white photograph with a rock strewn and perilous appearing foreground.

His compositions and low camera placement further enhances the illusionary effect, with Gordon appearing to hover over grass, plants, even trees. In one black and white photograph, he appears to be flying over a number of airplanes, which paradoxically are grounded, while he is not. In another, he is suspended over a wispy cloud, as thought that is all that keeps him afloat, much like in a dream within a dreamlike state.

Gregory Crewdson in his foreword, writes;

“The medium of photograph has always had a direct relationship with truth and the representation of facts. These pictures present an intersection between Daniel’s compulsive desire to fly and photography’s capacity to capture the moment….On a fundamental level, the art of photography is about the miracle, and how to make the ordinary, extraordinary. These pictures do that in it’s purist forms. They capture suspended moments, perfectly situated between transcendence and doom.”

Like the poetic Icarus and Daedalus, Gordon’s act is very metaphoric, as an attempt to escape something that resides here on earth, be it relationships, responsibilities, cultural and society’s rules, or personal demons. It is not evident what he wishes to escape from, but he tries repeatable. It does appear that he has momentarily escaped the rigors of earth’s confines and obtained a fleeting and momentary freedom. But yet this is an unattainable quest, to escape the confines of earth’s pull and loosen the cultural ties that bind him.

When comparing the Fall of Icarus to the re-imagining of technology, Wolhee Choe compares the narrative flight of Icarus to a Freudian death wish, stating:

“…the foreground of imaginative action and the background of quotidian life…the imaginative act is initiated by dreams…through the principal of opposition and through the recorded imagination of our own mortality, our mind is activated, oscillating between life and death, construction and destruction. If an ordinary mode of experiencing the world is habitual, ideological and willful, an esthetic mode of experiencing the world is critical, formal and vitally transforming. This is a simultaneously rational and inspirational experience that allows a new perspective. Aesthetical pleasure is linked, as poets have described it, to this vital transformation of one form to another…to expand the self’s boundaries.”

Another analogical reading of Gordon’s photographs is that his flights are representational of all artists, that Gordon has become the “Artistic Everyman”. That an artist and their creative spirit will attempt to soar, a father (parental) figure may provide caution about the risks involved, that eventually there is an artistic flight that may require taking huge risks; financial, spiritually and personal. An artist will lay it all out on the line, taking a “leap of faith” and expose their artistic soul, to fly near the limits of the sun and damn the consequences. Essentially the artist is alone and exposed, who may momentary be levitated, with spirits high, regenerated and not fully cognizant of the all the risks that are lurking ahead. What we don’t see is that what remains at the end of the artistic flight, a hard and sudden impact, with nasty thump or a soft harmless roll in the fragrant flowers and plush grass. There is the aura of rich mystery as to what becomes of the Artistic Everyman.

The hardcover book has a linen text wrap cover with a photographic inlay. It was printed and bound in China. Photographs are all horizontal, maximizing the space on the page, with the plates surrounded by narrow white margins. The plates are printed one per page, one page per spread 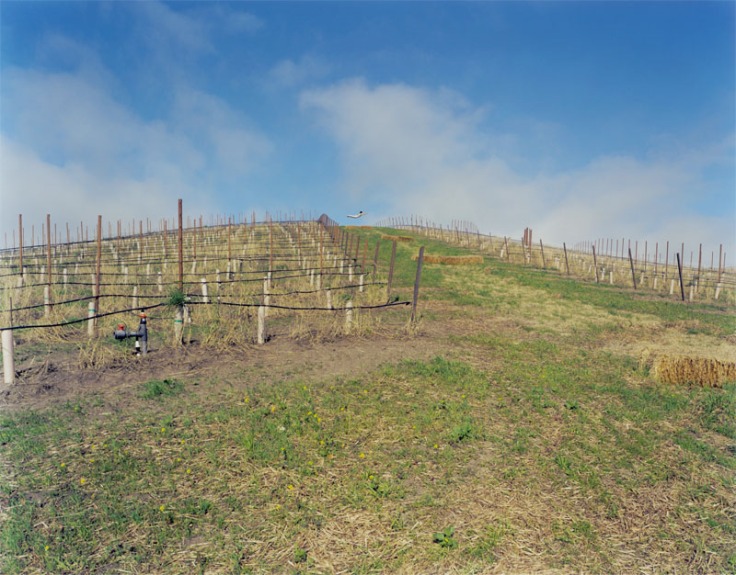