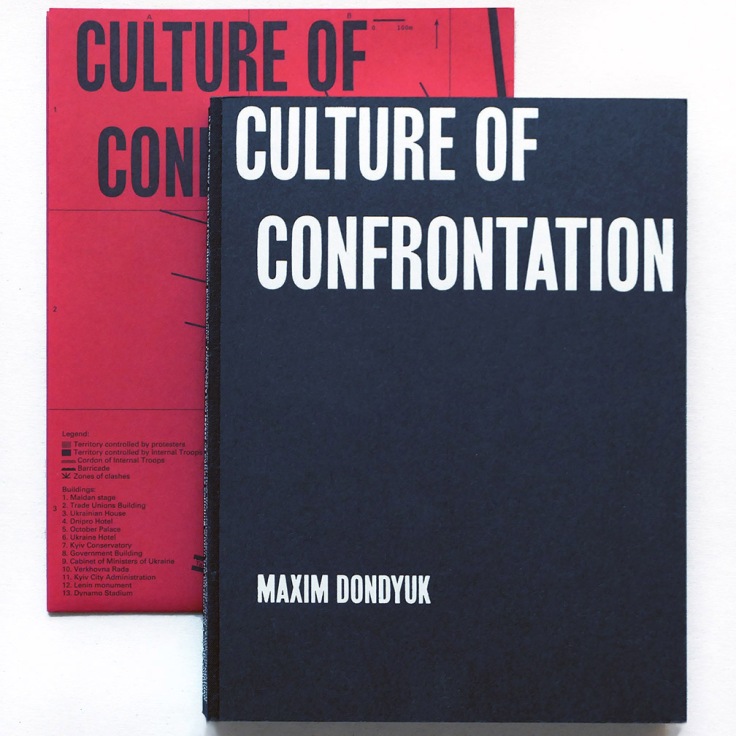 In these crazy times it is especially disheartening to view violent scenes of man-made confrontations between “right and wrong” – a clash of cultures, defined in this photobook as differing and seemingly opposing world views, old versus new perspectives. At issue is the question of where Ukraine’s allegiance should be placed, and such issues often are seen as an either/or proposition. This new way of looking at “culture” is even printed on the cloth-covered spine of this highly innovative and artful documentation of one of the early tragedies of this 21st century.

I have written about the folly of using physical violence to solve differences before, most recently in my review of Andrii Dostliev’s Occupation, which dealt with the heartbreak of the sudden inaccessibility of part of your homeland and the associated broken memories. In this new project by Maxim Dondyuk and his team, the takeover of parts of Ukraine in 2013-2014, still not resolved, is most impressively made close and personal in a different manner.

Dondyuk is a committed documentary photographer whose coverage takes him to the center of the action. Using only a 35mm (moderate wide-angle) lens, he needs to be extremely close in order to document this conflict. Most especially, Dondyuk has a vision for the totality of the spectacle, a vision that is akin to wide-screen cinematic perspectives and narration; he pulls the viewer totally into the scenes, to the point that there is something unreal about what we are viewing. And that is the point: the violent activities, based merely on ideas of past and future, are so absurd – yet real – that we are shaking our heads in disbelief at the same time that we realize that we are witnessing harsh reality. How do you explain all these deaths with policy and politics? A feeling of helplessness can set in – is this how progress is accomplished?

Dondyuk says about his own work,

“Photography for me is like a visual diary. It allows me to discover and understand this world, while also expressing a philosophy, even a guiding religion … photography is also a means of emotional expression … to feel the same emotions, the fear, happiness, and sadness of the subject.”

We survey the impressive sequence of images, well paced to show interim moments of deceptive calm and many encounters of fierce action as well. We study the alternating use of subdued darkness and red/orange-infused action-packed encounters. If ever there was a book that shows the folly of physical violence, this is the one!

The photobook is enhanced by three interviews that provide background information for the sequence of events, a separate map of locations (printed on red paper of course), a diary of events with painstakingly assembled descriptions that match the sequence of images, covering the period from 2013 to 2014 and including a tribute to those who lost their lives.

A most impressive and comprehensive project, well done!

Hardcover with printed cloth spine; 292 pages, including a supplementary map, a full timeline, and a list of the fallen; 18 x 24 cm (7 x 9.5 inches); printed in Lithuania by KOPA 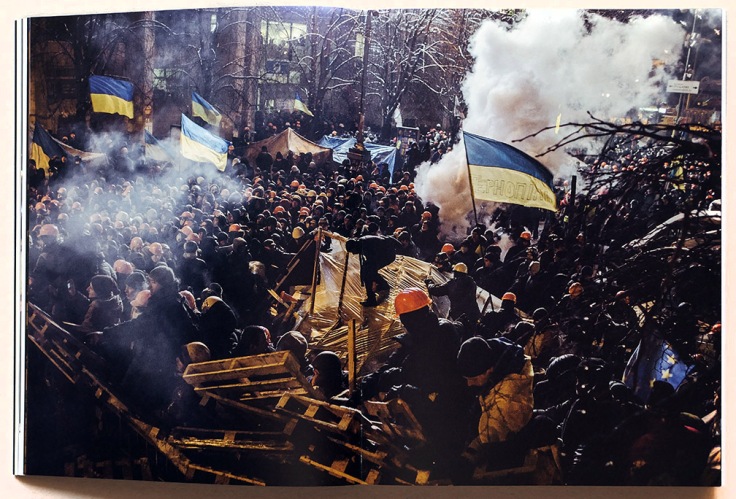 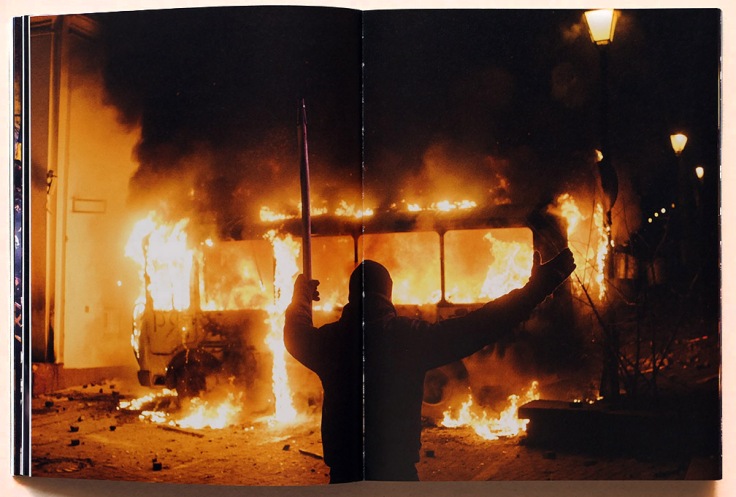 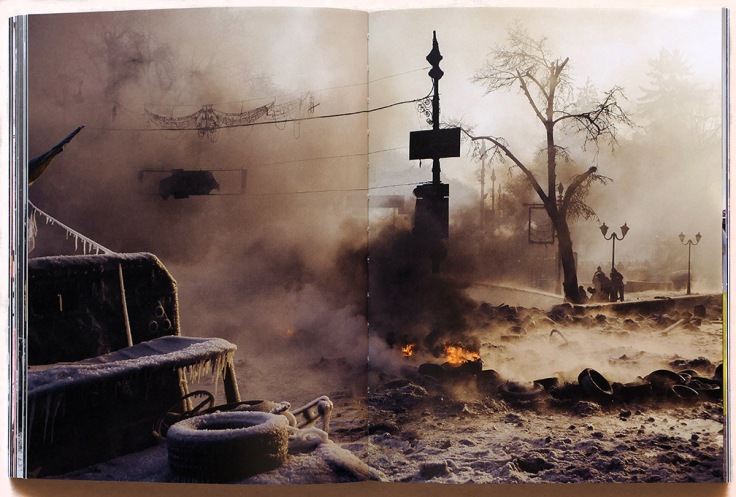 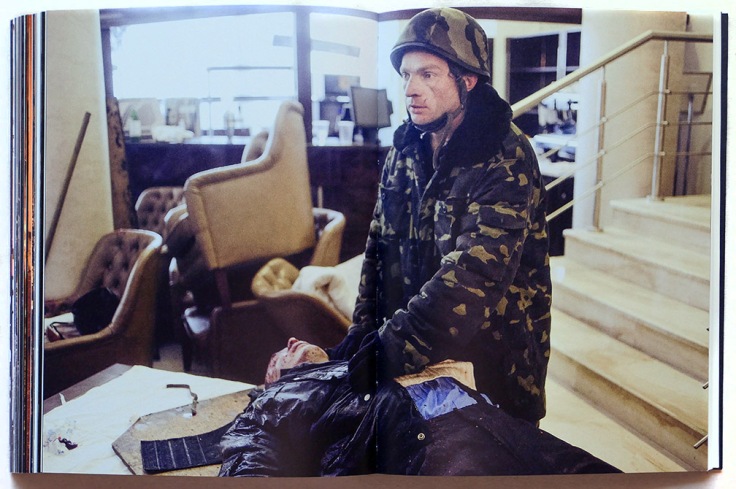 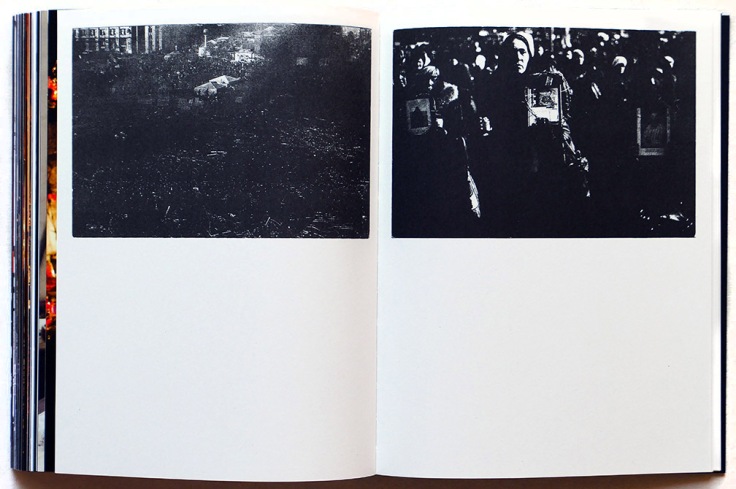