We are in the midst of increasingly unacceptable acts of intolerance, escalating from verbal to physical violence. Today’s event on a baseball field near the U.S. capital is just the latest example. When will they ever learn: VIOLENCE DOES NOT SOLVE PROBLEMS! And so this book is another very important example to demonstrate this point, as was the work by Paula Bronstein on Afghanistan, which I reviewed here as well.

Strife in the south of Thailand goes back many centuries, but violence has intensified in the 21st century due to clashes based on some extreme interpretations of beliefs. Gerard McDermott in the volume’s Introduction supplies an extensive account of historical developments affecting this region of Thailand, a monarchy with a military government, especially the border area between Thailand and Malaysia, a difficult region that we have heard much less about than other difficult areas around the world.

Richard Humphries has visited this area, which presents a mix of Buddhists and Muslims, Thais and Malays, over a period of eight years; he speaks the local languages, and currently lives in this area of Southeast Asia as well. A seasoned photojournalist as well as a storyteller, he has used this background very effectively. We are able to see the historical and the modern aspects of this part of Thailand, the old and the new, the various activities that sustain both livelihoods and belief systems and traditions, in both somber and light-hearted moments. Some of the images are literal and stark, some metaphorical and mysterious, and his approach suggests that all these aspects could well coexist peacefully, if only some levels of greater tolerance were part of the mix. A particularly attractive feature of this volume is the fact that both ordinary and extraordinary images are included so that we see both everyday life and the unusual side by side. The detailed captions supplied by the photographer for each image are also very helpful for the viewer’s understanding. A highly recommended volume for those interested in global strife and its cultural contexts, as well for anyone who wants to enjoy excellent photojournalism!

This volume was juried into the Photo Independent Photobook Competition and was subsequently on display at the Photobook Salon. 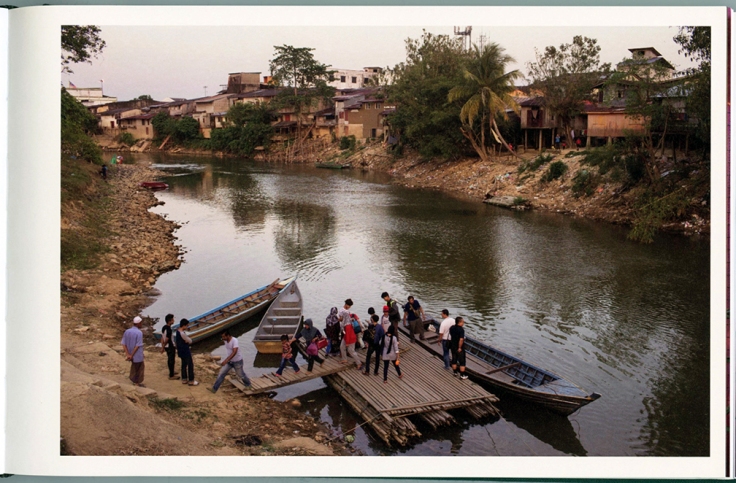