“Carpooling” is an American, maybe Southern Californian, term for an occasion when multiple individuals ride in the same vehicle to the same destination. On the freeways of California the need to increase the quantity of carpoolers in order to relive the increasing congestion has raised the process and infrastructure of carpooling to an art form. Alejandro Cartagena (b. April 1977 Santo Domingo, Dominican Republic, now lives in Monterrey, Mexico) became aware of the American phoneme of carpools and diamond lanes on a visit to Southern California and riding on those congested freeways must have been an amazing experience compared to the highways of his home in Monterrey. Nevertheless this southern California experience created the seed of a conceptual idea that would play out later in Monterrey.

The actual process of carpooling is a well-known practice outside of America, where vehicles can be rare, expensive to own as well as operate. Upon first seeing a family of five on an electric scooter in China a few years back was a bit of a cultural shock which quickly wore off when this sight became a common occurrence. Likewise, Cartagena observed how pick-up truck loads of workers were routinely traversing from dense urban sites to new housing and construction areas on the expanding outskirts of the Monterrey region. The carpooling of the Monterrey workers was an economic necessity for the reasons stated above; trucks are both expensive to own and operate and there are few reasonable alternatives to travel to these new construction sites.

Cartagena found a high advantage point, a pedestrian overpass, to create this topology project; a study in carpooling, in which he could look almost straight down into the passing vehicles. The resulting layout of these vehicles take on abstract shapes, a visual mapping that we do not frequently observe, and further reinforcing the topological nature of his project.

There exists both a sameness of his subjects; similar models of the pick-up trucks, organizational layout of the front hood, cab and the back bed of the truck, the differences in the paint and condition, the open bed in which there is a mash-up of workers, equipment and tools; that varied over time and season. It is evident that he became known for making this series of photographs with many of his subjects gazing back at the photographer and thus connecting also with the reader. Many of these photographs are humorous; worker stretched out sleeping during their trip, gazing up and interacting with the photographer, and others showing a bit of concern. His subjects frequently appear cold and huddled together to protect themselves from the windy, chilling ride.

The subtext is an investigation into identity and culture. There are the economic differences between the poorer construction workers providing the labor to the unseen nicer homes and estates of the upper class. Even within the photographs there is an economic narrative; the “first class” ride; which is inside the protected cab along with the driver, and the “economy coach” section, in the open and unprotected back bed of the truck.

To further understand his subjects, Cartagena took a similar ride in the back bed of a truck to see what his subjects were experiencing. Evident was the expansive blue sky marked by the occasional objects that were seen from this prone perspective; overpasses, signage, etc. Cartagena then intertwined these alternative viewpoint photographs to help break up the flow and cadence of his book that in turn provides more tension and dynamics to what could become a very static and repetitive sequencing.

The book layout provides one top view of a pick-up truck one each of the facing pages inviting the reader to provide comparison and take note of the subtle differences between them. The differences over time, who they are and where they are from, as well as where they are going and what are they going to do when they arrive. The interior of the truck bed provides some clues; equipment, tools, and the clothing of his subjects.

As a book object, the hard covers are constructed from raw boards, printed and die cut to reveal an interior pick-up truck that is the subject of the cover’s line drawing; creating an interesting three dimensional visualization. The heavy cover boards provides some heft and protection for the photobook and the color printing by a Mexico City press and bindery is nicely finished. The insightful Afterword essay was provided by Jessica S. McDonald. 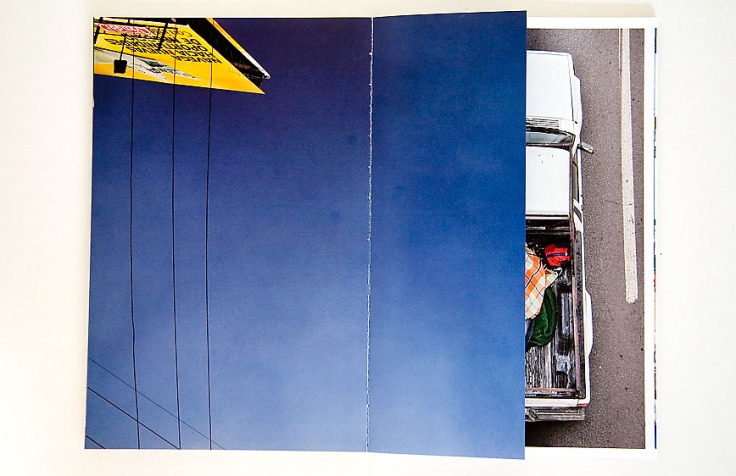 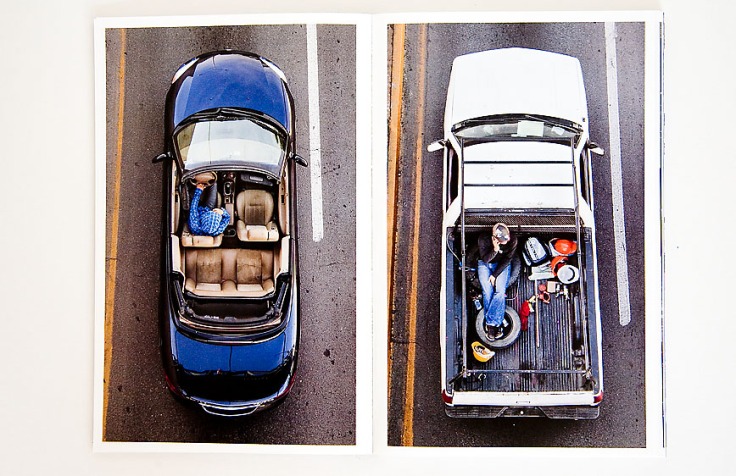 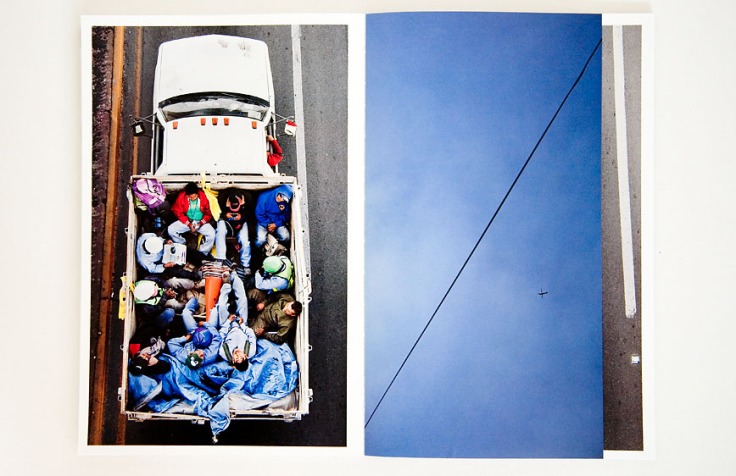