TBW Books is providing selected photographers with a unifying theme for an annual publication of four books co-published as a set. For the Subscription Series #2, the four photographic artists, Marianne Mueller, Noon, Todd Hido, Ohio, Alec Soth, Sheep, and Abner Nolan, Away, were invited to present a personal exploration of their work. Each photographer was provided with complete design control of the resulting book, with the only stipulation that their photobook follows the overarching book size, printing and binding format of the series.

Abner Nolan utilizes found photographs to construct his narrative, which for Away, is the remnants of a memory that might affectionately be call a road trip. For Nolan, the road trip is disjointed; a mash-up of fleeting experiences and encompasses fuzzy, fading and inconsistent content. The lead-in photograph of a convertible car with the top down hints at unlimited potential opportunities for the ensuring journey, but the faded and poor condition of this photograph has darker undertones. The subsequent photographs narrate the ups and down realities of such road trips. The narrative is ambiguous without a defined starting or ending point, which provides many opportunities to make this our own journey. Nolan’s narrative tugs at my own memory and triggers recollection of my parent’s road trips with my younger brother and sister, and similar to his faded photographs, likewise my memories are becoming more indistinct with time. The family road trip was a seemingly endless journey to visit some majestic destination while intermittently stopping at the homes of relatives or family friends. My recall of visiting my older relatives is as vague as Nolan’s photographs, an indistinct face, a faint recall of a room, or snippet of an experience. I sense that for Nolan, his memory of road trips are now increasing melancholic experiences.

In his photobook Ohio, Todd Hido investigates his experience growing up in the Midwest and coming of age. His narrative is intertwined with his early photographs and recent photographs made with the same camera. Although the book has a documentary look, we have been provided clues that the photographed events are not what they appear to be. Much like the masks we don and façades we erect to conceal our inner most feelings in order to protect ourselves. On the surface Hido’s photographs appear to document an ordinary household, but there are present dark edges and an uneasy undercurrent. The older photographs are mottled and deteriorated. In one photograph a wall is plainly visible to have been damaged by blunt force trauma, and in another, a man holds up a boy in one hand and a mini-keg of beer in the other, while the boy reaches towards the mini-keg, not the man. The narrative later evolves into the passing of adolescence into sexual awareness in the opposite sex, from a state of guarded anticipation to finally confident and unabashed liberation.

For Marianne Mueller, her photobook Noon is a narrative that could also be titled “Nooner”, another word aptly designating a mid-day romance. Her photographs sequential narrate the ensuring emotions of a sexually charged romantic fling. The rumpled clothes on a floor, although abstract, imply a wild abandon, with people wearing progressively less clothes until everything goes dark, but illuminated by the sparks of intense emotion. Although I find the photographs to be very metaphoric, they are not entice an overly romantic feeling, but elicits coldness and distance, with her photobook perhaps saved by the mysterious undertones and unanswered questions. 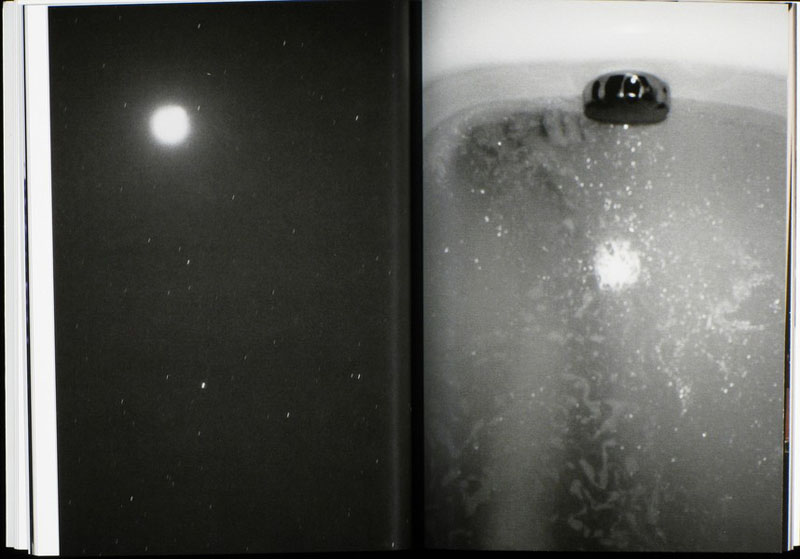 In his book Sheep, Alec Soth is only photographer of the four to introduce text with his narrative, which I find to be a humorous running essay that accompanies each progressive photograph in this delightful story. The constructed storyline is about serial experiences, how one event can be tangentially related to another and that due to circumstances many times beyond our control, we can find ourselves in a full circle haunted by out past experiences. Soth’s photographs are created as well as culled from previous projects, such as Sleeping by the Mississippi, to create this amusing and personal narrative. Although Soth’s photobook has the lighter narrative of the four, it is by no means the lesser of the four and equally profound and rich in context.

The four photobooks have stiff cover with dust wraps, which have a nice repetitious repeat of the book’s title, but due to the glued and stapled binding, these books are very difficult to open and read.

Although the books have printed a 2008 copyright, the publisher has stated that the copyright was meant to state 2009.