In its earliest conception, a book was an assembly of sheets, usually in a packet, folder or other device that could hold them together. Subsequently the practice of publishing a book was to bind the sheets together to improve storage conditions, maintain an orderly progression of the pages and provide coherence. A year ago, Lay Flat’s first book harkened back to the days of loose individual sheets which were assembled together and now likewise the photobook of Gauthier Sibillat, Strasbourg, Fin de Ville, Paysages Ordinaries (Strasbourg, End of the City, Ordinary Landscapes) is individual sheets gathered within a poly sleeve.

In his photobook, I am not sure if Sibillat appears to be investigating what constitutes the “end of a city” or a providing a subtle criticism of the endless growth of cities. I think that I can argue both which adds an interesting complexity to his twelve color landscape photographs.

The end of a city perhaps can be a boundary, between what is the city and what is not, artificial such as a fence, wall, road or naturally occurring such as a river, ocean, or mountain side. Many times the boundary is very artificial, a line drawn on a map of which some coordinates have been established. When the boundaries are artificial, the city boundary may be difficult to identify, perhaps gradually the spacing between buildings and structure gradually widening until and while walking I might suddenly realize, I must not be in the city any longer. In Southern California where I live, I can move from one city into another without realizing that I have made the transition, as the suburban cities are mashed up against each other in one continuous flow of streets, houses and roads, almost without end. There are few if any naturally occurring boundaries that would delineate a city where I live.

Likewise, it is difficult to observe what could be Strasbourg’s “boundaries” in Sibillat’s photographs. He uses a documentary style to photograph structures situated in a mix of urban and rural location that are in vary states of development. As if the end of the city seems to be slowly moving and expanding based on some perceived needs or someone’s economic interests. He appears to be investigating the slow expansion of a city’s boundary as defined by the location of these new structures and that the new structures are now pushing the city’s edge.

There is a stylistic design element that is consistent within Sibillat’s photographs. Each of the photographs has a detailed foreground of earthly terrain, with structures occupying the middle ground and above all filling in the top of the frame is the sky.

The earthen foreground is the raw land in various states of development. In one photograph, wild weeds and a barren tree seem to be waiting for the bulldozers blade, with a new structure sitting ominously in the middle ground foretelling of the pending urban development. In one photograph the ground has been completely covered with concrete, symbolizing an attempt to keep the earth subservient to mankind’s needs and control. In many of Sibillat’s photographs the details of the earthy foreground predominate over the structures in the middle ground, which are photographed in a manner to make the structures appear smaller, as to reduce the structures importance as compared to the terrain.

The middle ground of Sibillat’s photographs is occupied by either a building, house or looming structures that are in a state of flux between just complete or in the various stages of development. The structures seem to be imbued with a feeling of pathos, they do not appear to be enlightening, upbeat or happy places. The structures denote the presence of mankind, but there are not any people included within the photographs. Hence the photographs leave me with a feeling that there is no life in these sterile places. These landscape scenes are serene but appear lonely and sad.

Finally there is the sky, either blue and clear, clouded and overcast or obscured by an almost tangible dense fog. Mankind’s structures attempt to dominate the earth, but the sky prevails above all, symbolizing that mankind might be attempted to dominate nature, but in the end, nature will prevail.

The loose prints allow you to curate the book and determine which sequence that they will be experienced, or individually framed or with a little handiwork, complied into a post card format to be shared with someone who is at a distance.

The photographs are lithographic printed card stock, varnished, captions on the reverse, assembled in a printed poly sleeve, accompanied by an index card printed with the introduction in French by Sibillat printed on the opposite side. An English excerpt from the introduction is provided by on a separate sheet. 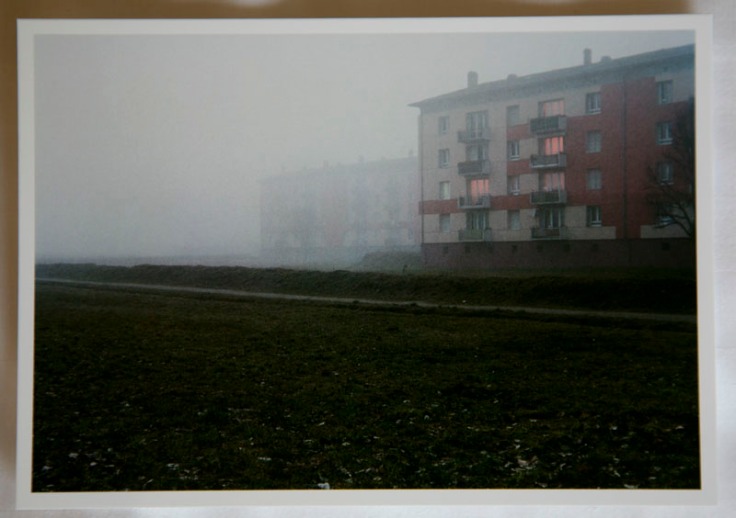