For most of the photobooks I review, they usually are stand alone books, but I feel that Roger Ballen’s recent book Boarding House needs to be placed into a larger perspective.  Specifically to the content of his two previous books, Shadow Chamber, published in 2005 and Outland, published in 2001, both by Phaidon Press. Otherwise, it feels like I have walked into the middle of a fascinating and entertaining discussion, but I am left at a loss of what the topic is.

First, a little background, Roger Ballen is a New York born photographer who is living in South Africa since the 1970’s. He was a mining consultant while concurrently making personal documentary photographic projects in South Africa, many of which were subsequently published as books. He has experienced the social-economic turmoil in South Africa as the previous status quo was literally turned upside down.

Regretfully, I do not have either of Ballen’s two previous books, but the book’s images on Ballen’s web site are sufficient for me to develop an introduction to his current book. Outland was the photobook that Ballen created in 2001 which was a substantial departure from his previous documentary work. It introduced new elements, a change of location, blurring of reality and fiction, the creation of a set, and what we might now call cinematic images. But like his earlier documentary projects, Outland appears to have a heavy amount of human content and central to the book’s theme. The people in his photographs have now become actors in Ballen’s framework, the first two photographs from this book, below.

The photographs in Outland are a little easier to read, not as abstract and obscure as they will become in his later books. Due of the changes in South Africa, the implications of a white man lying on top of a bed, while a black man lies under the bed (Elias coming out from under John’s bed, 1999), seemingly trapped, seems an obvious comment about the social-cultural order. This of course is not an issue for South Africa alone, and it universally speaks to the subjugation of any minorities.  Likewise, a white person sleeping in bed (Portrait of a Sleeping Girl, 2000), with what could be the symbolic white ancestors looking down from the hanging photograph, and meanwhile a black cat takes a dominate position on top of the unconscious person.

In Outland, I see symbolic gestures of the people, meaning laden graphics applied to the walls of the odd theatrical stage, where everything seems orchestrated. The structure of the photographs is consistent, the shape of the square boundaries, the flat lighting introduced by the direct flash, printed middle key with an absence of pure blacks. The photographs are purposeful non-traditional,  lacking the full black and white tonal range I usually associate with modernistic photographs.

Subsequently Shadow Chamber, published in 2005, has the same photographic attributes of flat lighting, printed middle key with a mid-value compressed tonal range, the grayness of the photographs reflecting the grayness of the content. There are more gestures and graphics on the walls, perhaps more animals and it seems the actors are starting to move more to the background. For me, the content in Shadow Chamber  becomes more abstract, harder to read and decipher. Which is not to say that it is any less interesting, however it is not the same moralist story that we see in Outland.

Which now brings me to Ballen’s recent book, Boarding House.  Like Outland and Shadow Chamber, Ballen continues to use a similar photographic style, direct lighting that flattens the photograph, low contrast tonal scale predominately within the middle grays, collaborative actors performing upon a stage, with the walls becoming graphic backdrops and an integral part of the set. Another stylistic aspect of Ballen’s photographs is that his process creates a flat two-dimensional plane, similar to the process of flattening the adjustment layers on a Photoshop image, eliminating any hint of three-dimensionality. His process emulates the ensuing two-dimensional aspect of the photograph itself, whether as a print or a page, and speaks to the photographic process as an abstraction of reality.

A part of where the fact and fiction blur is that this project was created in a real building that is acting like a boarding house.  Just not a traditional boarding house that most might imagine, but a three story abandoned industrial building in a industrial area. The actors are actually the building’s squatters, who seemingly are willing to participate as collaborators in these constructed stories. We see what they call their home, thus a part of their reality.

In Boarding House, the participants, his actors, drift further into the background, behind walls, into buckets, under parts of the set, out to the edges of the photographs frame. We see only parts of the actors, their hands waving over a blanket, eyes peeking through holes, feet dropping in from above, or an arm extended into the frame and into a snake’s mouth. They are still an important element, but no longer taking the center stage. There are also animals, the ducks, rats, mice, dogs, puppies which can randomly make an uncontrolled appearance, as well as parts of animals that can be strategically positioned.

The painting and drawings on the walls and sculptural elements create a work on a temporary canvas. The drawings are only fleeting, soon to be just a memory after some-else takes over this room and space and implements the changes they feel necessary to create their living quarters. But for an instant, this is Ballen’s work space, his studio, his theater.

Ballen’s altered interiors reminds me of the work of John Divola, who’s body of photographic work started in the mid-1970’s of appropriating temporarily abandoned buildings (Vandalism and Zuma Beach Series), then painting and deconstructing the walls and space, subsequently photographing the effects. Only the photograph of the creation remains.

I find Ballen’s book to be very complex. The photographs evoke dark thoughts about curious and mysterious events.  I found the strangeness of these photographs to be bizarre, with some outright scary. The bizarre and out of context events depicted, with the symbolic drawings on the walls, doors and furniture create a surreal appearance. These photographs have become more abstract and to me, more complicated, both harder to read, but also loaded with more alternative contextual meaning.

This is a gritty gray book, and with each page turn, I found another imaginative and complex photograph to spend time with. I think that I only have scratched the surface for all of the potential meanings that lay within the context of Ballen’s photographs. This book depicts a noir theater created out of Ballen’s imagination.

Another resource is the interview of Roger Ballen by Darius Himes, co-founder of Radius Books, about this book, which can be found here, where Ballen states the following about his black and white photographs:

I can’t separate this work from black and white because I don’t think in color. I’m 58 years old, and I’ve been doing black and white since I was five years old. I don’t really like color. I like color paintings, but color pictures give you a wrong impression about reality. Most people think the camera is a factual instrument to duplicate reality, or objectify reality in some way, which is completely wrong! A color photograph leads you to believe that whatever you’re seeing is the real color, when in reality it’s photographic color. In very few cases, artists can manipulate color to create meaning the way a painter does. But with painting we never start with the assumption that reality is being duplicated. What worries me about color is that there is something artificial about it, but it won’t admit to its artificiality.

For some, these metaphoric photographs will be a delight, for others, as the contextual meaning has become more obscure, a challenge. Trust me, I think that this book is a challenge worth taking on and recommended. 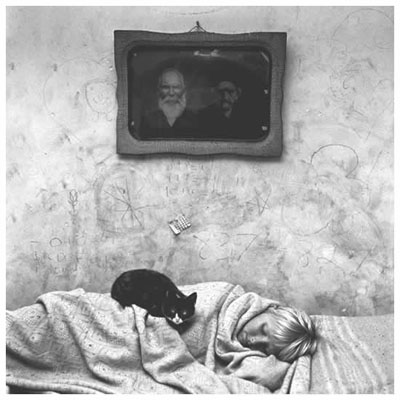 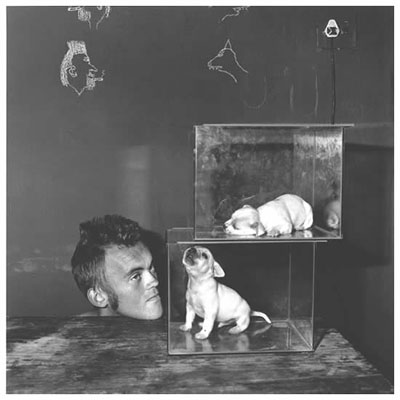