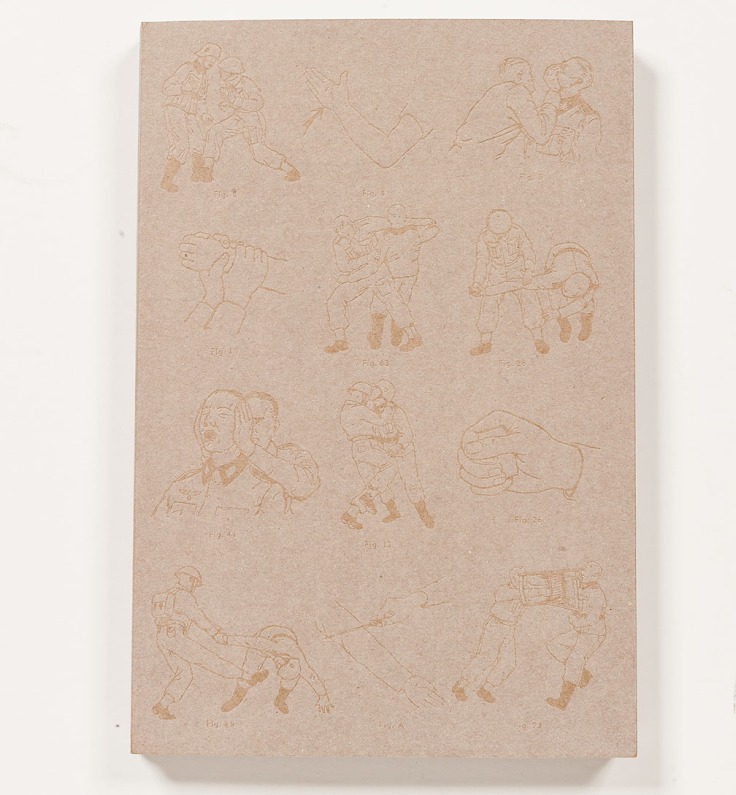 Notes: War. As I have stated before; I don’t understand it and fortunately I have not had to experience it, although my house is built on an old WWII bombing range. I think Donald Weber’s War Sand is a similar multi-medic type of publication that has much in common with Louie Palu’s Front Towards Enemy beyond the fact that both are investigating an aspect of war; Weber looking at the traces of World War II’s D-day invasion on the coast of France and Palu is grounded in the present in Afghanistan. Whereas Palu utilizes multiple types of publications for his collective narrative, Weber provides his multi-media story within one set of covers.

Weber’s book is a series of sections in which his investigation changes formats, styles and viewpoints to explore the complexity of his subject; the D-day landing zones. The “introduction” is a lyrical study of the sky, clouds and into the heavens above and then the viewpoint progresses to include the landing beaches (code names: Utah, Omaha, Gold, Juno and Sword) until drilling down (literally) and then into the sand itself. The attributes of sand of these beaches was in of itself a secret commando mission that Weber’s grandfather had partaken in 1943.

A scientific section on microarcheology of current sand samples from the various D-day beaches reveals in minute detail the finding of what was expected as well as some things not expected, while disturbingly some very small shrapnel debris that is no doubt related to this intense battle that began on June 6th.

Weber has created a number of very intriguing set of dioramas to tell the story of his grandfather’s commando raid to get beach samples. The book concludes with a visual storyboard that is a combination of D-day movie stills and archive WWII photographs. Although the latter is an interesting read, it may be the weakest aspect of this multi-layered book, nevertheless for a visual book investigating a complex subject I applaud Weber for taking an artistic risk by including this last section.

The clever book design includes a sleight-of-hand with the utilization of a few Japanese folds that are printed on the concealed interior pages referring to the secret codes names created for the D-day invasion. The cross-word puzzle printed on the interior page of the fold provides a ghostly image with the thinner paper stock, barely discernable of the outer pages in this section of his photobook. The books little secret visually hints at all of the many secrets surrounding this WWII event and indirectly the reason for the book’s creation.

The higher key lyrical coastal photographs provides an alternative viewpoint and belies the horrors that had occurred at these same locations on that stormy June 6th day in 1944. The casualties for the Allied landing forces on D-day alone include 2,700 British, 946 Canadians and 6,603 Americans. For Germany, the number of casualties are still unknown, but is estimated between 4,000 and 6,000. The Battle of Normandy that resulted from the invasion incurred 425,000 Allied and German troops that were either killed, wounded or went missing. Perhaps not often mentioned are the number of French citizens caught in the middle of this battle which has been estimated to be between 15,000 and 20,000 casualties. Some of the many statistics of war that this narrative only hints at. That my father landed on D-day plus 3 with the U.S. Second Armor on Omaha beach and at the war’s end came home is something I am grateful for as otherwise I would not be here to delight you with this review. It was also a dark event that my dad refused to talk about, so indirectly I think of this book as being part of his story.

What really intrigues me about this photobook is that as a visual object it is similar to my thought processes and the way I think about a subject; a constant jumble of ideas mixed with various kinds of facts, different memories and recollections that seem to oddly cross-paths. In turn this process creates ideas about things that I want to dig into and tangential thoughts that then result. It makes book development challenging in trying to decide what the narrative should be and how to present it. I enjoy how Weber’s multi-faceted investigated of this complex subject resulted is a photobook that is an visual interesting, nicely organized and a delightfully layered narrative.

Weber states “The war-relics presented here create an immersive experience on the theme of collective memory. They include WWII spy-craft and old Hollywood movies, dioramas and drone-mounted cameras, private post-war memoirs and wistful seaside photographs. These artifacts reveal war’s quantum traces. And they expose our civilization’s longing for a final victory over death.”

Other book by Donald Weber that is reviewed on TPBJ: Bastard Eden, Our Chernobly. 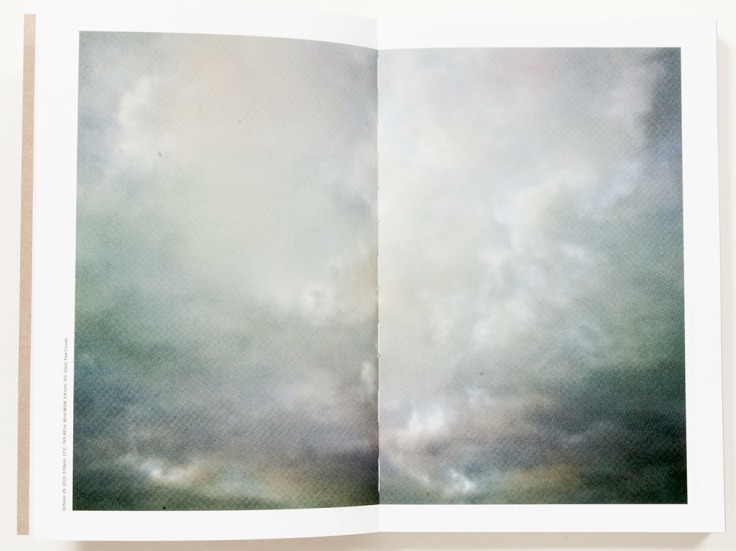 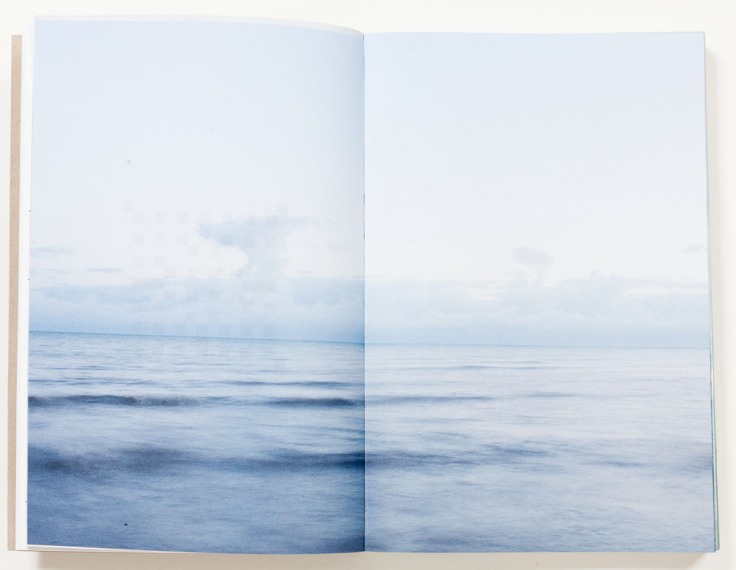 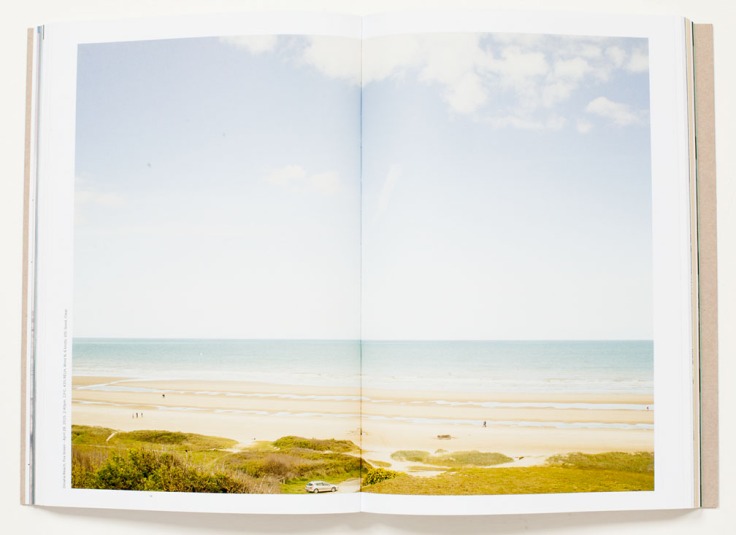 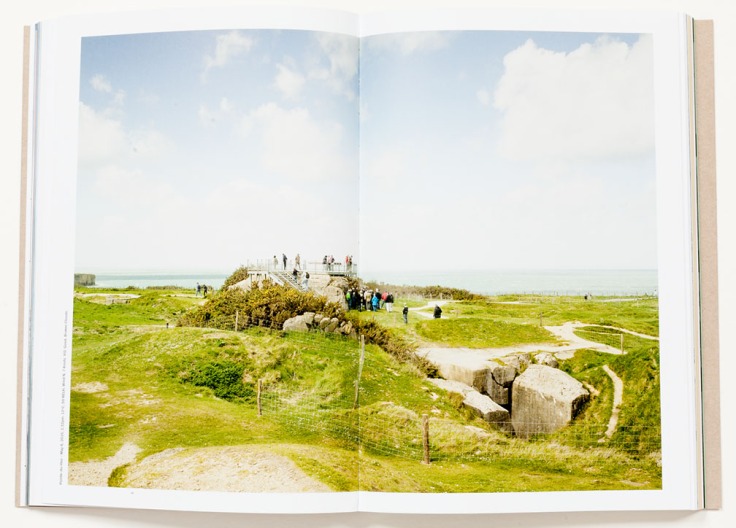 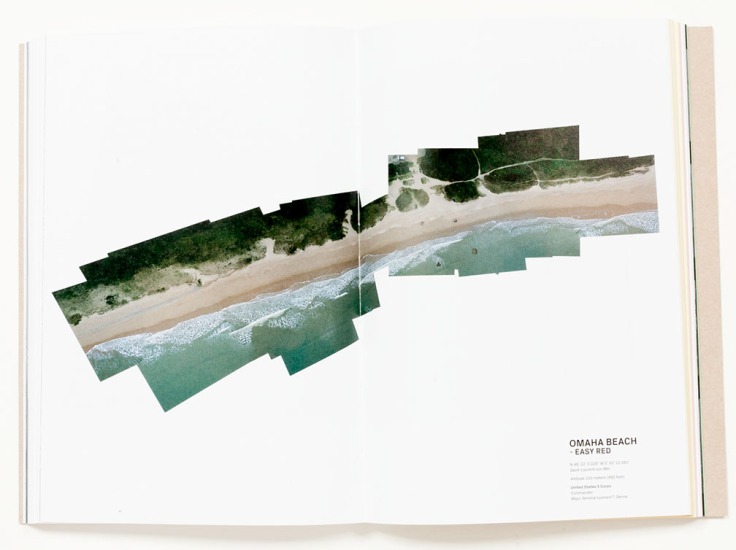 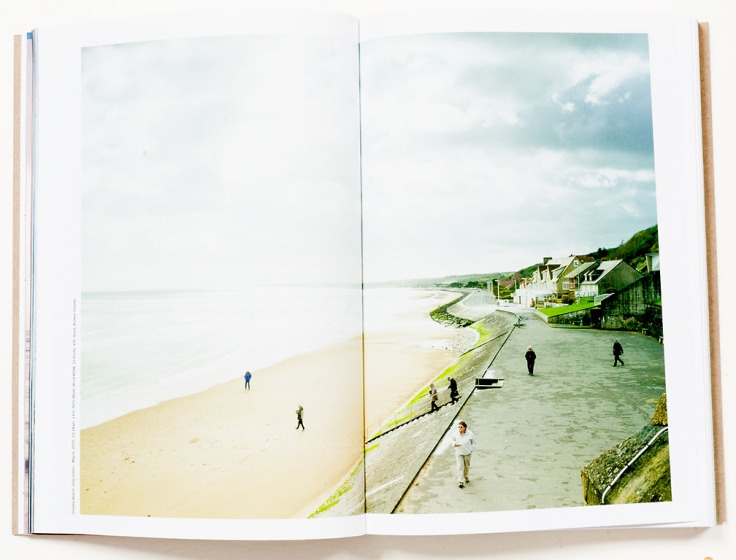 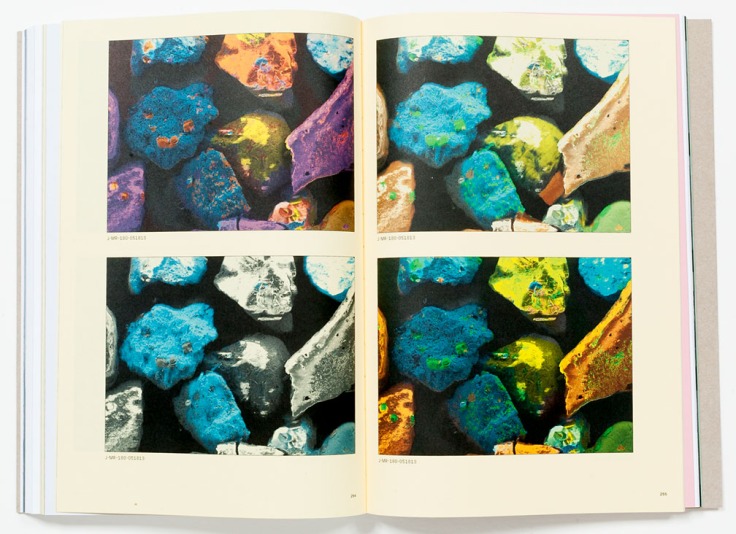 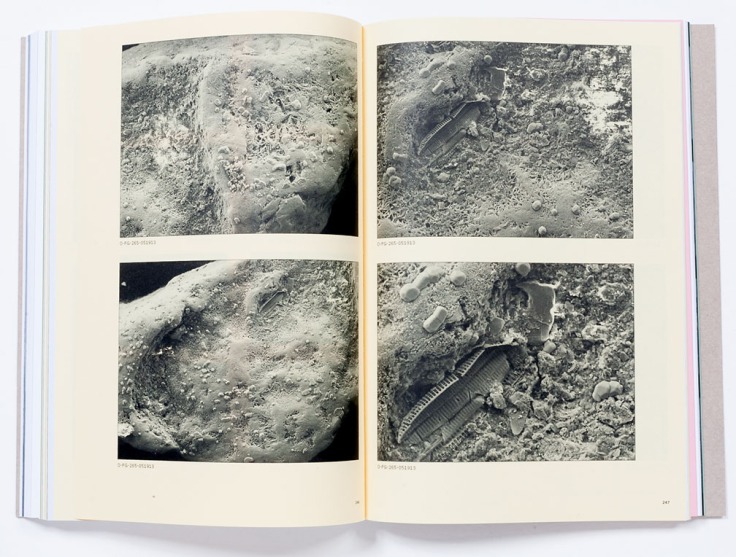 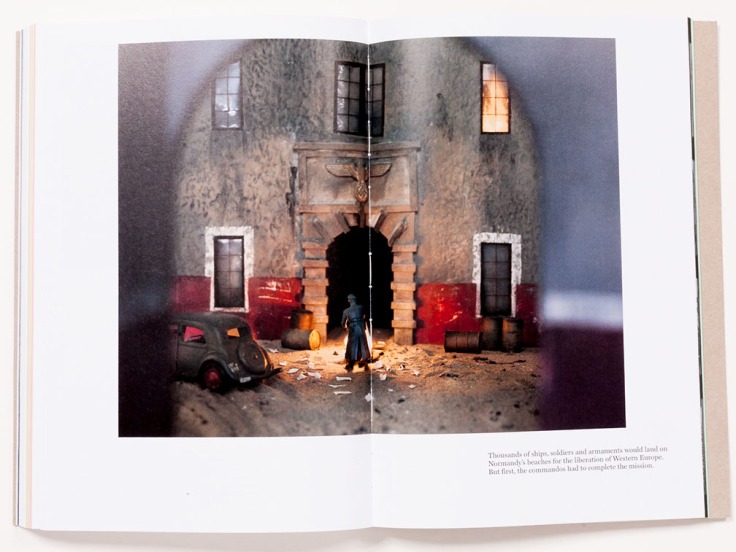 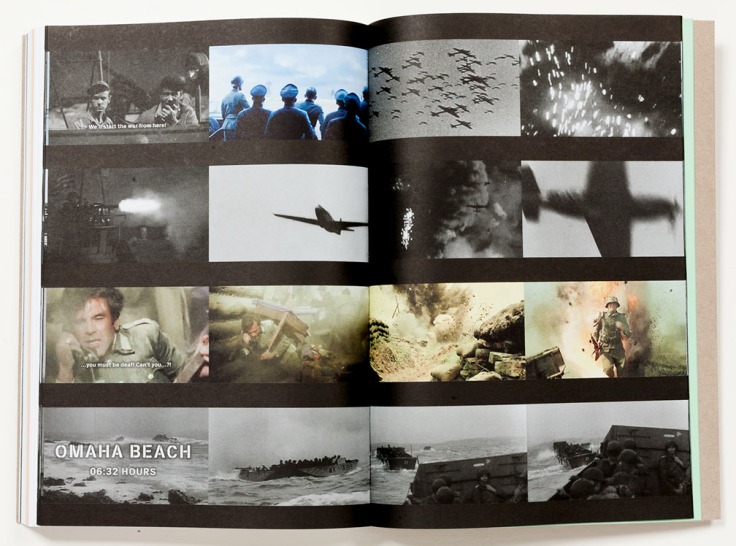 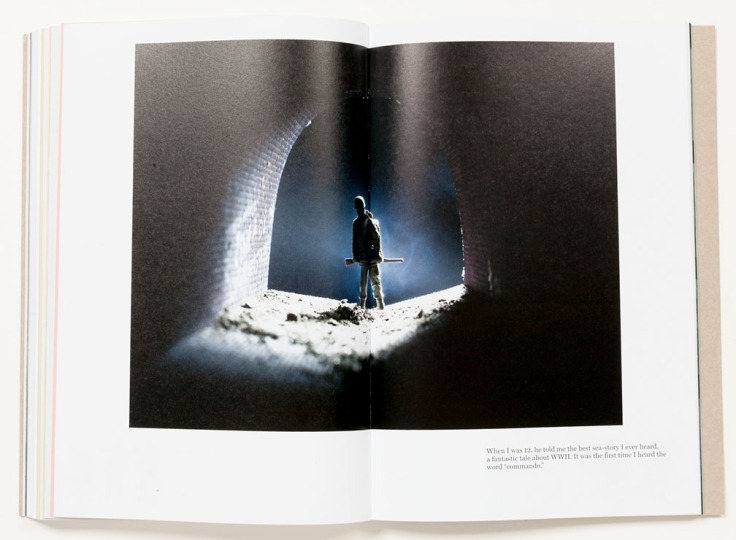