Notes: Martin Parr, prominent Magnum photographer and photobook collector, as well as prolific author, editor, and curator, is an astute observer and critic of popular culture, and he has an appealing sense or humor that gives his work a bit of a lighter touch as well. It takes a top member of our photographic profession to present himself in photographic self-observation, as Parr has done here, in a playful yet rigorous way to make fun of formal and informal (self-)portraiture, somewhat analogous to Cindy Sherman presenting her skewed selfies in recent Instagram posts and in other self-created roles in the past.

A popular view is that such types of self-representation are self-deprecating. Far from it, if I may add my opinion, also on behalf of my own self-portraits. Parr presents  himself in a variety of portrait roles that popular culture “calls for” – the macho hero, the seemingly relaxed luxury vacationer, the wannabe space traveler, the know-it all explorer of exotic lands, and many other such photographic clichés. By doing so, he holds up a mirror to his viewers, some of whom may have seen or may have wished to see themselves in such roles as well. He is presenting himself in these photographic “autoportraits” or self-portrayals in the manner of an actor-photographer, and we are not seeing the photographer as himself, but rather the figure of the photographer acting out specific roles. This is an important distinction: the photographer-actor is not endorsing what he is portraying, but merely slipping into a role for each image and out of the role right afterwards.

This volume is the second edition of the successful original publication with the same title from the year 2000, increased in size by many additional pictures. They are all in color, and an amusing set to view for all ages. There are many amusing discoveries and cultural icons to connect to as one studies his survey of portraits with cultural and other icons, from wax museums and posters, and political figures are also included, of course. The thing that makes this collection all the more amusing is the similarly serious, dutiful expression we see on his face in virtually all the images. Very proper indeed, the stiff upper lip in the presence of all these impinging cultural expectations and assorted stereotypes and figures such as 007 and Putin, part of the mimicry. We can see all of the things good portraits should NOT be – flattering over-retouching, cheesy studio sets, awful fake compositions (such as merging his head with a muscle-man body). Questions of identity and self-image, wishful thinking in projecting one’s self through images, and cultural stereotypes as perpetuated by tourists are just three of the discussion topics raised by these images.

Even after this season of gift-giving, this volume would be a nice little present. Not only can you study lots of wacky and idiosyncratic portraits (imitation not necessarily recommended!), but you can also try the puzzle embedded in the cover that lets you jiggle two small balls toward the center portrait of the author himself … good luck! 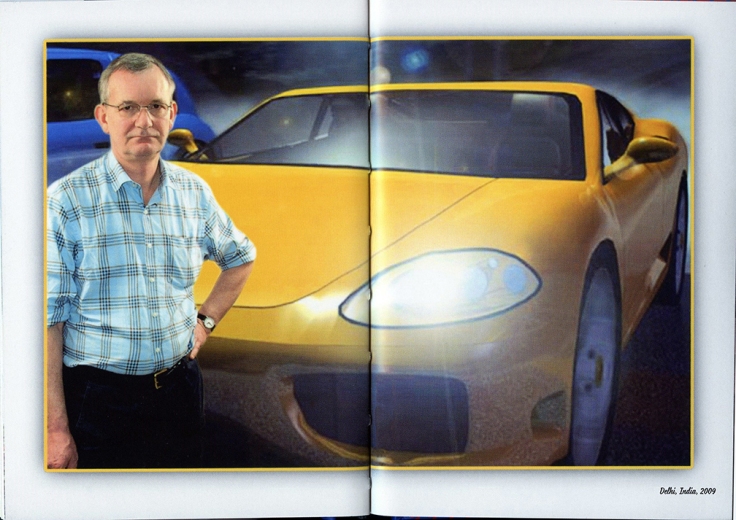