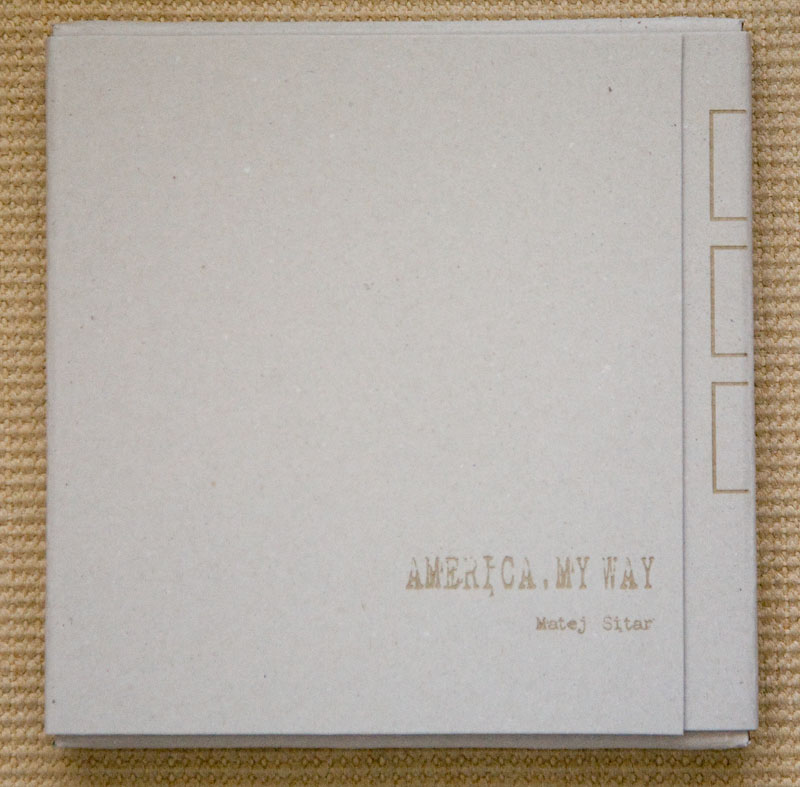 This last month I had an interesting exchange of emails with Matej Sitar regarding the self-publication of his photobook America, My Way that I thought I should share the underlying lesson. What actually sparked our discussion was the request from Mel at photo-eye‘s on-line magazine/photobook store for my list of top ten photobooks for 2013. While making my selection, one of those that I found really interesting, Matej Sitar’s photobook, which was acquired about mid-2013, but in checking the copyright date, it stated 2012. That should have been a quick elimination (the foundation for this little story) for a best of 2013 photobook.

Nevertheless, since I had been exchanging emails and Fb messages with Sitar for most of this year, I sent him a quick question; when exactly was his photobook published in 2012? The short answer was that in December of 2012 was when he brought all of the elements together, including the text copy stating 2012, but in fact, it was not formally published and launched until March 2013. Great! I could then place it on my 2013 interesting book list, regardless of the copyright date. Nice thing about being a photobook blogger, I am not tied to formality!

As Sitar stated during our exchanges, it did not occur to him at the time as to the potential consequences of having the 2012 date on his photobook at the time and how that might impact the end of the year “Best Photobook” list frenzy that occurs. We only need to look back to last year to see how Cristina de Middel’s Afronauts went so crazy after getting listed by so many folks that Aftronauts resulted in being considered the most popular contemporary photobook for 2012 and the subsequent mad scrabble to include de Middel into so many exhibitions and workshops. Instant stardom! So yes, the end of the year “Best Photobook” list can really make a difference in a fine art career, whether you agree with this or not, these lists have do have an impact. Sadly the corollary is that is if your photobook does not make it on any of these lists, it can have another type of impact.

So is there a rule of thumb for those who are self-publishing to consider? For a first time photobook and not represented by galleries where you can grander some exhibitions and press, it may make sense to join the Spring publication crowd (There are two big “traditional” photobook publication seasons, Spring and Fall). But Spring is a relative time, so maybe a February launch date is your “Spring”. Which means you really print and bind in November/December of the previous year, printing your copyright date on your release, not your production date.  This would allow plenty of time to get your book out to the photobook reviewers, into the stores, get some PR traction and maybe an exhibition or two to hopefully make an impact. In fact, this was the strategy that de Middel followed.

Now some books have been published in the Fall that are making the current lists (I think that there are more than 55 photobook “lists” or more). Again,  your “Fall” might be in July or August (or even earlier). I think part of the thinking about an early Fall release, somewhat like the movies released late for the Academy Award season, is that the books are still fresh in everybody’s minds and the buzzzzzz is still running strong when folks starting thinking about their list.

Just keep in mind, those reviewers/bloggers who publish their list each year, they work on their “Best Book” list the entire year, constantly evaluating new titles and content as to whether to be included on their end of year list and perhaps replace another title which is not as interesting or as great a body of work.

So when self-publishing, this is just another aspect to take into consideration along with the begillion other tasks that need to be accomplished. Best of luck!!

One thought on “Self-publishing – a matter of timing”