I have noted recently that of the many types of ephemera that seem to be cherished are the police mug shots, which either intentionality or intentionality, capture the subjects at their worst. Chris Crites has accumulated a wonderful collection of vintage mug shots, transferred the image to ordinary kraft bags, and then painted the images with acrylic paint. Crites series of painted mug shots was recently published by Portland, OR based Ampersand Gallery and Fine Books and the book was aptly titled Mug Shots.

The photographic paintings are usually captioned with a title and in conjunction with his application of color, selection of subject and appearance provides us what seems to be portraits that are entirely suit our stereotypes of the criminal act. The photo paintings are on what appears as sections of ordinary grocery bags, with their creases and folds still evident. These grocery bags are themselves intended to be ephemera, to be used for just the one day to assist with carrying home the recent purchases. Similar to the mug shots, Crites has glorified these brownish kraft bags and extended their life much beyond their original intent.

The murder is a rough appearing guy having what appears to be a broken nose, implying that trouble may not have ever been far away from him. A weathered appearing man in red jacket identified in his mug shot as a criminal for “cocaine/morphine” appears to look very similar to a couple of known modern rock & roll guitarist. Two individuals, the woman for “contributing to the delinquency of a minor” and the other for “indecency” (a man or a woman?), are painted blue, symbolic of the early Blue laws that were enacted to protect and safeguard our morals.

The man accused of “racketeering”, his shirt collar standing up with his head slightly cocked, with the eyebrow shadows looming darkly over his eyes, does make me feel that he appears a bit dangerous. A woman, apparently sitting, has her head slightly bowed and her hands appearing to be neatly folded in her lap, already appears to have her story of repentance ready for any and all who might be interested in hearing her sad tale. Nevertheless, there still appears to be something in the way Crites paints her face and eyes that brings out a slightly contradictory visual story about this woman.

The man, pictured in denim work overalls, accused of “crime against nature” I find very intriguing as to what crime this could possibly be about. The heavily bandaged man, whose mug shot is about his crime of “distributing communist literature”, could have in prior times sustained some of those injuries in the squad car on the way to booking station.

Who these people were, what relevancy would their “crimes” have today, were they in fact guilty of their accusations, what has happen to them in the ensuring years is speculation and exactly where Crites would like to take us with his visual narratives as he states, “each one of these images has a story”.

The book object: Stiff covers with a glued binding. One of my issues with the glued perfect bound bindings is the potential loss of content on the printed pages, as it seems more of the page is lost in the gutter than was anticipated in the book design. As a result, an image can become truncated, as in the last photograph below. The loss of the some of an image does creates it’s own mystery, but one that was probably unanticipated by the publisher and author. My second peeve with glued prefect bound books is that they do not lay open easily, besides being difficult to photograph for my commentary; they do not stay open while lying on my desk to be studied. 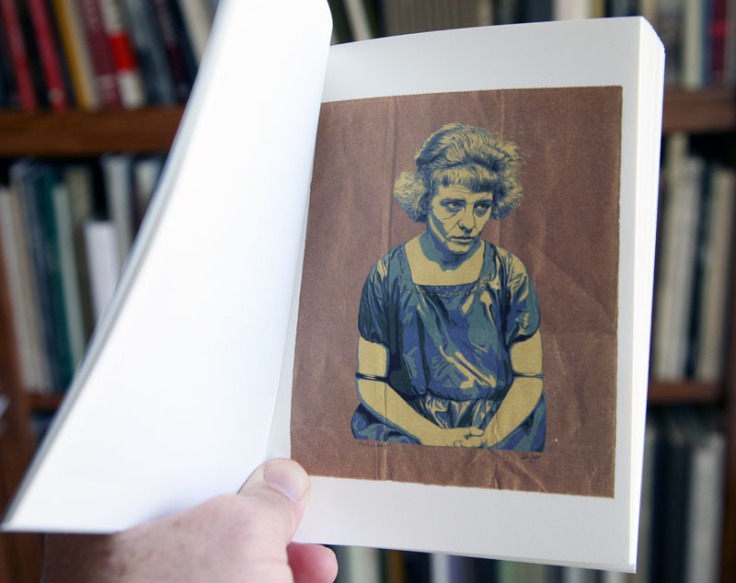