For its 10-year anniversary, Classic Photographs Los Angeles christened ROSEGALLERY’s new space in Bergamot Station Arts Center in Santa Monica. Rose Shoshana (shown above, photo by Brittany Neimeth) and her team were in high gear hosting the weekend event before officially opening the doors to their new location just days later. As is the standard, select leading galleries and dealers make up the list of presenters “with emphasis on quality of work and expertise of exhibitors.”

This year’s event (September 6–8) brought in new and familiar faces, with a welcoming camaraderie between exhibitors, collectors, curators and photographers. Its trademark intimate setting included a dozen leading galleries and dealers across the U.S. and Canada. Masterworks in the categories of vintage, modern and contemporary photographs dotted with rich photo books makes this event something to look forward to each year.

The alternative to over-sized art fairs, Classic Photographs L.A. hosts a wide range of photography and books with something for everyone, whether just beginning or adding to a collection. Classic Photographs is akin to a mini photo museum spanning from its earliest days to today, only better, since you are able to speak with artists and representatives of the work. The event is as much about experiencing the history and art of photography as it is about connecting, collecting and inspiration. 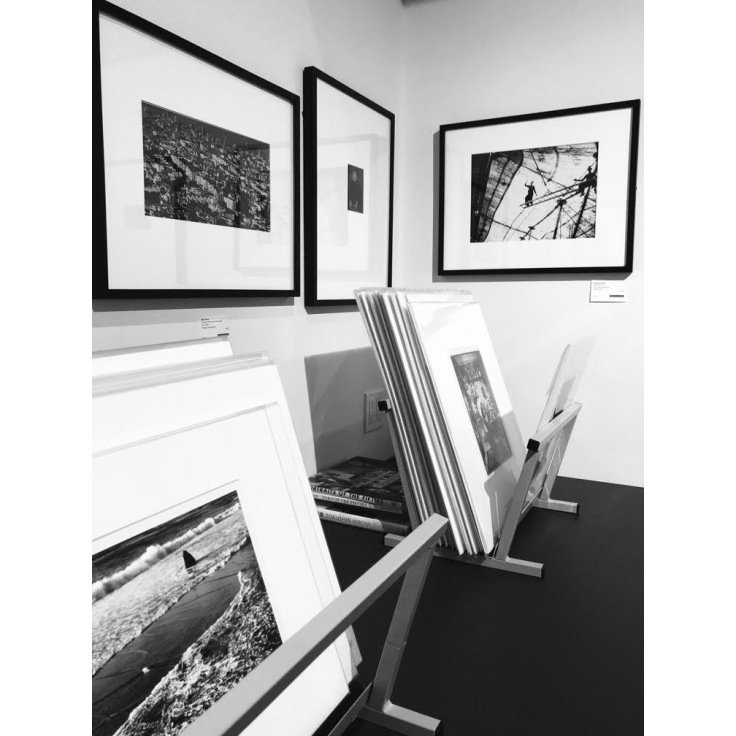 Prints and books of Michael Dawson Gallery, Los Angeles. Mr. Dawson is one of the three originators of Classic Photographs Los Angeles.

Terry Etherton’s table (Etherton Gallery, Tucson, Arizona) was filled with photo book gems. When asked which he’d like to show me, he went straight for Mark Klett’s Panorama of San Francisco from California Street Hill. Klett is best known for his rephotography projects focusing on the western landscape, exploring the effects of time and man’s influence on the environment. Here’s how Terry described the book: “In 1878 Eadweard Muybridge made a 13 part, 360 degree panorama of San Francisco from the roof of the Mark Hopkins Hotel. Each image was made with a mammoth plate camera and the prints were contact albumen prints. In 1990 Mark Klett made the exact same panorama from the exact spot as Muybridge. Mark used a 4 x 5 camera and Polaroid Type 55 film.” Terry spoke of the burgeoning photo community in Tucson and of his upcoming exhibit with photographer / painter / publisher Andy Burgess (now on view until November 16), some of whose publications (Dark Spring Press) have been reviewed by the PhotoBook Journal: the photobooks by Esquer and Stivers.

The work of Andrew K. Thompson (represented by Alan Klotz Gallery, NY and a gallery of his own – The Little Gallery of San Bernadino) pulled me in with his unique vision. His chromogenic prints are vibrantly colored, chemically altered and accentuated with thread. They’re stunning poetic representations of the rugged degradation he sees in his home county, San Bernadino, CA. Based on the toxic footprint of photographic industries since the inception, Andrew views photography “as poison and a cure.” His process involves chemicals and layers of analog manipulation, and he believes, “If you’re not on the verge of disaster, you’re not doing it right.” When we spoke, Andrew was in the beginning stages of translating his work into book form.

With a delicious palette of historic and contemporary photographs and books, Joseph Bellows Gallery in La Jolla, California, is also a prominent gallery of the photographic arts. Their collection of 1970s era American work document desolate spaces, landscape, architecture and urban details with the pure simplicity of geometric shapes, light and shadow. 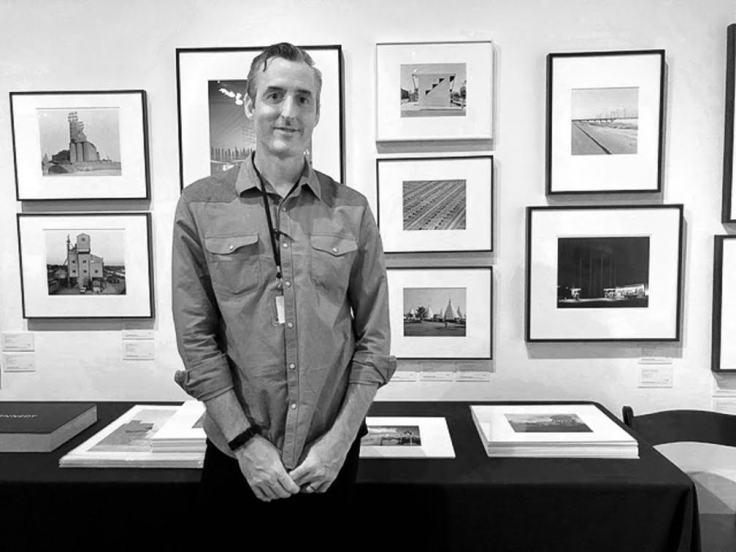 Here, Mike Mulno, Artist and Director, Joseph Bellows Gallery, stands before a collection of works, one of which is his, shown below.

The discovery of In The Sunshine of Neglect brought fascination and joy. I was drawn to the powerful images made by esteemed photographers like Julius Schulman, Robert Adams and Lewis Baltz. Each photograph a visual cocktail rich with content and history. Made by my very talented colleague, Douglas McCulloh, this photo book reflects his exhibit of the same name. Earlier this year at the California Museum of Photography and Riverside Art Museum, McCulloh curated a 194 image exhibit that spanned seven decades. This book documents the “rapidly developing spaces of Inland Southern California” with text by Susan Straight. It is an immersive experience inside the “vast territory of landscapes … encompassing … 500,000 square miles of slat brush, sage, and inspiration (LA Times)” Below is a glimpse inside.

In Character by Anja Niemi, published by Thames & Hudson, 2019, and at Galerie XII, Los Angeles

The newest gallery attending the event is Galerie XII Los Angeles. Featuring mostly projects in contemporary photography, Anja Niemi is one of their stars. Her work reaches a worldwide audience and is a solo endeavor. She photographs, stages and performs each scene as she tells a story of identity, being seen and not seen. Anja does not see these as self-portraits but portrayals of a fictional character. “I actually hate having my picture taken, but when I’m alone in costume it feels different. I have always photographed this way because I am more comfortable by myself. I love making pictures and I don’t want my nervousness or insecurities to stop me.” This, her 4th monograph, was reviewed in the PhotoBook Journal.

There was so much more that I saw and didn’t get to see and many more galleries and artists to feature. But then, there’s always next year!