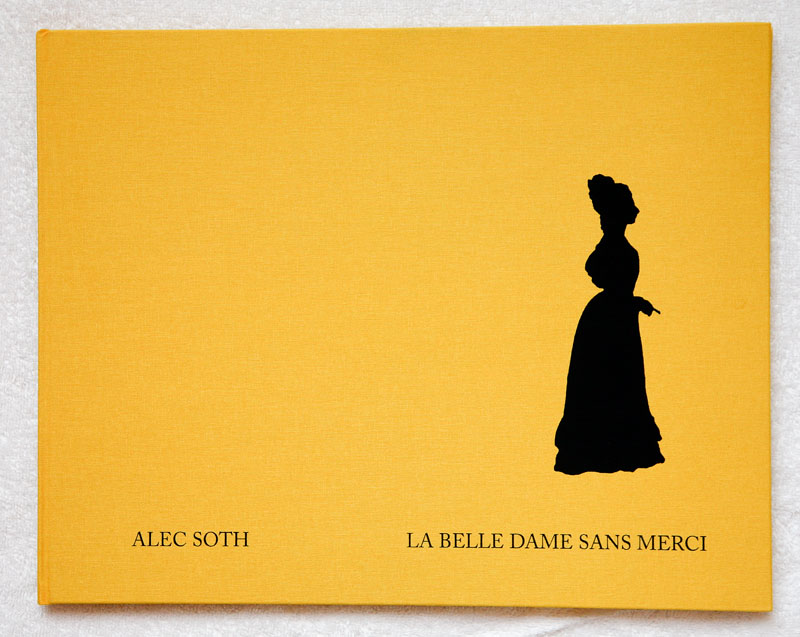 What do you have when you mix a Midwestern American Photographer, a Nineteenth Century English Poet, a prominent Italian city and a French titled poem = Alec Soth’s La Belle Dame Sans Merci (a.k.a. LBDSM)

Earlier this year Soth resided in Rome to complete a commission for the tenth FotoGrafia Festival Internazionle di Roma and the resulting photographic project was exhibited at FotoGrafia di Roma in late September 2011 in conjunction with the publication of the hardcover book by Edizioni Punctum. As a frame of reference, the FotoGrafia di Roma commission is an opportunity to portray the city of Rome with total freedom of interpretation.

As a Prolog to writing the commentary on this book, I had the opportunity to join Soth at his presentation at FotoGrafia di Roma earlier in September at the MACRO Testaccio. Soth stated that he was becoming more interested in how to construct books as a narrative and questioning the order and sequencing of the photographs in a book. As an example, could he throw all of the photographs up in the air and depending on how they fell, might that result in the image sequence? (Although to me, LBDSM does appear to have a subtle order to the sequence, but that may in fact maybe due to my ability to construct a possible sequential narrative). Soth also stated that introducing something out of context (which for me is the pineapple in LBDSM) might create some cohesion, reminding me of Ed Ruscha’s phtotobooks, most famously “Varous Small Fires {and Milk}”), for which Ruscha has stated, “Milk seemed to make the book more interesting and gave it some cohesion”.

Rather than directly investigating the city of Rome as been Soth’s prior photographic style, he opted to instead focus on one of Rome’s more interesting literates, abet similarly short-lived, the Englishman John Keats (1979 – 1821) and Keats poem La Belle Dame sans Merci. Although Keats lived in Rome for only the last four months of his life, he seems to be inexplicably tied to this city, perhaps as this is where he is buried and from where he penned his last romantic missives to his most well-known love, Fanny Brawn. Although Soth has utilized Rome to set the stage for his narrative, the poem was penned while Keats still resided in London.

La Belle Dame sans Merci is translated into English as “The Beautiful Lady without Pity”, representing the Fatal Woman, or as alluded to in the original French poem, the woman as a mysterious witch. Keat’s poem, much like Soth’s photographs is loaded with enigmas. I enjoy one description of Keat’s poem in Wikipedia, that again like Soth’s photographs, “it avoids simplicity of interpretation despite simplicity of structure.”

I find one of the more interesting photographs early one is the contemporary homage to the similar Roman photograph by Ruth Orkin photograph. This may become a Soth trademark, as in Soth’s earlier book “Broken Manual”, he recreated a Robert Frank photograph (window, Butte Montana) in homage to Frank’s photobook, “The Americans”

This photograph is a great re-creation of a classic Fatal Woman in Rome, but the inclusion of the man holding the pineapple on the left side of the frame creates a lot of tension. The reason for the pineapple is not apparent to me in this photograph, but Soth ties it in later.  Nevertheless, I will admit the inclusion changes up the Orkin inspired photograph and creates a subtle tension that seems confirmed with the photograph of the smashed pineapple sequenced later.. For me, this is an homage to Ed Ruscha on how a pineapple might provide “cohesion” for a book.

In the middle of the book, Soth provides a non-photographic image, a page with the plate number XV in white text on an orange field with the identifying caption “During my time in Rome, I wanted to make a beautiful picture of the city. But I found it impossible. The city was too beautiful to photograph”. Interesting, I first felt that this was meant to passively satisfy the Fotografia commission, as in the past, the resulting bodies of work have been a documentary style treatise of some aspect of the built landscape of Rome.  A second way to evaluate this plate is to consider the work of Susan Evans’s “The Story” (2001) as narrated by Nathalie Herschdorder; “In the absence of images and presence of words, (Soth) tells a story already known to everyone, questioning the omnipresence of (Rome) pictures in our society as well as their use in the media.”

The last photograph I would like to call attention to is the portrait of a mysterious woman (plate X, Georgia) with her mouth open and forming a distinctive heart shape with the smoke; symbolic of a woman who is in the process of casting her spell on the unsuspecting “pale kings and princes”.

The book object: The large, thin, hardcover book was printed in four-color lithography and bound in Rome Italy, with numbered plates and captions provided in the Titles & Notes section. The book was curated by Marco Delogu, with essays provided by Bartolomeo Pietromarchi and Francesco Zanot, with the text provided in English.