After reading Eugene Richards recent photobook The Blue Room, I found myself thinking about the book’s title, perhaps more so than other books that I have recently reviewed. I think that I have two interpretations of his title, which are complementary and indicative of this body of work. My first thought about the book’s title was a free association to both Picasso’s Blue Period and to Blues music. Both Picasso in his Blue Period, as well as the music of the Blues are descriptive and symbolic for depressed feelings, melancholy and a state of sadness. Second thoughts were relating the title to the rural term for large, open sky, a.k.a. Montana’s Big Sky country.

Combining those two general line of thoughts, I arrive at this book book’s intent as a melancholy documentation of the large, open spaces of rural United States.  Thus you could say that Richards photographs are the visual equivalence to the musical Blue notes.

For Richards, this photobook has been particularly noted as probably his first all color project. If that is the case, well done, because his use of color is beautiful, as he pulls out the tonality, intensity and emotionality of the colors of his subjects, without the photographs appearing to be a bad Photoshop lesson on color over-saturation.

His color photographs are of abandoned and decaying rural structures, most of which at one time were classified as houses. Some time ago, these structures were vibrant with those who lived and were functioning in these houses, just as they were intended. At which point these structures would be have been called a home by those living there. But the time that these were called a home has now elapsed, and alls that remains is some decaying evidence that someone had been there at some time.

“As I slowly make my way through the collapsing rooms and begin sifting through what’s been left behind”,  Richard writes, “the old places spawn what can only be called memories that come and go in the fragments of broken glass, in the convergence of shadows and light in the dust rising up from the floors.”

Richard’s has created a documentation of timeworn heirlooms sitting out in the rural landscape. He has captured places that are in a downward spiral, transitioning back to the dust that they were created from. It is also a visual essay about the state of rural America, the tough farm economics and the flight away from the middle America. His photographs are directly about things and places, capturing without the presence of people, only their remains. Even so, this is a photographic project about humanity, just indirectly focused.

The places Richard’s photographed are really easy to locate. Last summer, we made a road trip, including a stretch of I-70 between Denver and Kansas City, crossing the rolling plains of Kansas. I recall seeing many abandoned and forlorn looking structures that could easily have been any one of Richards locations. These gray structures were easy to spot, sitting on ridges and out in the middle of grassy fields. They did not look inviting, but appeared like dying remains.

Richard’s opening photograph is at a place that is some unnamed rural dirt cross-roads, with the photograph’s framing slightly off kilter, the mood set by the dark looming clouds. On one side is an ominous bolt of lightning corkscrewing into the far darken sky, while on the other side facing the camera is a slightly bent STOP sign, itself pockmarked with random bullet holes.  The photograph serves as a warning, do not proceed, do not go any further, turnaround, as there is nothing for you here. Go back and forget that you were every here. Proceed at your own risk, because you have been warned.

Richard’s photographs contain empty structures, and these structures appear to be mere shells. What is left standing has the the paint peeling off and the doors remain open as there is no real reason to close them anymore. The wood floor boards have become so rotten that they are collapsing under their own weight. The wall paper is yellowing, if there at all. Sometimes even the wall boards are gone, revealing the stucture’s skeletal timbers, like flesh that has come off the bone. There are decaying carpets and stair cases leading to nowhere.

The artifacts of people’s lives have been left behind, for what ever the reason. There are dilapidated beds, broken dolls, a lone women’s red dress shoe, rusted metal chair, clothes is disarray and uncared for, a couch infested with a hornets nest, Christmas lights still hanging, cooking utensils, photographs in picture frames, a toaster sitting lonely on an abandoned counter, loose black and white photographs of people, pairs and groups, young and old, worn and old piles of shoes, a faded face of a wall clock, broken dishes on a table, dirty flatware in a sink with a photograph of women still in its frame looking forlornly back at you, eyes making direct contact, and lastly a child’s rocking horse.

Richards’s viewpoint is usually within the structures, looking at the contents of the structure and on occasion a glimpse of the exterior landsape. He catches the window reflections to created multi-layered and complex images. Many times, the windows are broken and cracked, offering a fractured view, much like the contents in the photographs. These photographs are also symbolic of the multude of families who have lived there. Only the traces of the families are all that remain, left behind, no longer of value, abandoned to their own fate. Even these traces are fragile and may soon be gone, becoming dust in the wind. No one appears to be left to remember and it feels like nothing may survive in these places.

Richard’s photographs are also dark, capturing gloomy, depressing interiors, with an occasional ray of light that illuminates a spot here and there. There are no people directly present in these photographs, occasionally a dog or horse or some dead and decaying animal, such as the group of dead birds in a child’s room.

One photograph revels what appears to be the bottom half of a yellow and torn calander, slightly out of focus, and in the foreground a cematery. The cematery appreas to be not in the best of condition but still seems be tended by someone who still remains.

Another photograph is a haunting reminder of what was, a wall that now contains the outlines of past hanging frames. The now rusted nails were probably holding the family photographs, which are now gone. Left behind are the ghostly outlines and creating a dark abstract cubist image with the light and dark stained wallpaper.

Richards has found and photographed a wedding dress that has been left hanging on a upstairs doorway. Who would leave such an important dress behind, to hang loose and forgotten? Why was it left behind? Is it a symbolic of a marriage gone astray or broken and now this remnant is no longer important?

There is evidence of green grass in the fringes of Richard’s photographs, representing greener pastures, better opportunities. The green landscape can be seen in the edges of the photographs, or in the reflection of broken window glass, or beyond a torn porch screen.  Symbolically, just out of reach, tantalizingly close, symbolic of the hope that was desired in these places but the ability to sustain was just beyond reach.  Perhaps the reason for a family to pick up and move somewhere else.

Like wise we see dead insects on the window’s edge, the screen preventing their escape to the green pastures which were just beyond their reach, tantalizingly close, but dying with the potential freedom just beyond. Representative of the lives of those who had lived here, located in this place, economically dying, with the tantalizing green pastures just beyond.

They should be able to survive here, to live off the land and not have to abandon this place. But that was not the case. There where those who died here on this land, but there seemed to be no one willing to take their place, the next generation moving on to better opportunities, elsewhere. These are small farms in isolated places, the nearest small towns without the infrastructure or opportunities that play themselves out in the commercials on tv.

The chief concern for this photobook is what does Richards provide that is a new insight to an old theme? Although documenting a decaying rural community is not a new concept, I think that he has found a haunting way to capture the Blue notes of rural America. His pictorial framing is usually tight and pushes our noses into the middle of the content. He captures odd juxtapositions and creates complex multi-layered images, part reflected exteriors landscapes that are intermingled with interior spaces. To say that what is happening in rural America is sad and poignant, but it is not a simple story.

I think these photographs are metaphors, maybe something easier for us to relate to for the current economic realities. To help us understand what people are going through today when they realize their homes are worth much less than what they owe, and the current payments are more than they make. The despair that that they must feel when they just pack their bags and drive away and leave everything else behind.

The book has a single photograph printed per page, one photograph per page spread, each photograph with a small white border. The book’s design does allow the photograph to float on the page without interference by a facing page, allowing you to isolate your attention on just a single image. 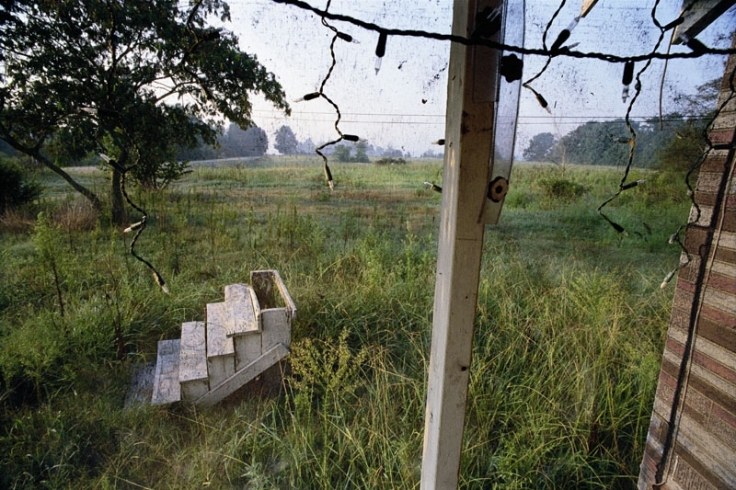