Coming out of the 103rd Street subway station the other day, I was struck by how much this neighborhood, once commonly referred to as Spanish Harlem, has changed since I came to New York in the late ‘70s. It’s not that the Latin nature of the place has been wholly erased – one still sees plenty of shops that cater to the predominately Puerto Rican residents still living there — but it now has that feeling of in-betweenness that washes over many parts of New York once clearly defined as ethnic and cultural enclaves.

96th Street long ago ceased to be the hard borderline between Manhattan’s toney Upper East Side and the roiling streets of “El Barrio,” as much a mythic place as actual — tall tenements in unbroken lines, fire hydrants spraying in the simmering heat, children playing stickball, skipping rope, finding moments of freedom and creativity in lives otherwise constrained by poverty and distant horizons of opportunity. We know this place from the masterful photographs of Helen Levitt and Bruce Davidson, and more recently, Latino photographers like Joseph Rodriguez and Camilo Jose Vergara.

And now we have the pictures of Leo Goldstein, a little-known photographer associated with the Photo League, whose members included some of the most influential photographers of the mid-20th century. Goldstein’s remarkable images of East Harlem made between 1949 and the mid-fifties have emerged only recently – over 250 prints vintage prints– preserved by the Goldstein family. East Harlem: The Postwar Years is a distillation of that documentary project edited by Régina Monfort and published by powerHouse Books. The book design is unobtrusive and keeps the images in the spotlight, which are accompanied by short descriptive captions. A preface by Juan González provides background about East Harlem and the Puerto Rican experience, and a text by A.D. Coleman contributes context for how and why this work appears only now, some seventy years since its making.

Not for the first time, the canon of photographic history has had to make room to accommodate overlooked bodies of work that have recently come to light. The discovery of colorwork by Fred Herzog and Saul Leiter requires a retelling of the emergence of color photography. And, of course, the lost and found life’s work of Vivian Maier has thrown a curatorial monkey wrench into the accepted chronology of street photography.

Goldstein’s East Harlem portfolio has the potential to stir things up in the same way, though perhaps more modestly, which is appropriate given the quiet, unassuming nature of his images. His pictures of street life do not exhibit the brilliant dance-like visual choreography of Helen Levitt, nor do they convey the desperation and danger seen in Bruce Davidson’s East 100th Street. What they do show, however, are people – in this case, Puerto Rican newcomers to New York – fully expressed in the moment. Many of his portraits exude a powerful inner presence that transcends any sense of victimization or hopelessness. He was photographing real individuals, not representations of type or ethnicity.

The fact is that historically, most documentary photography has been the purview of white men (and some women like Levitt), and their subjects, often, are people of color living in poverty. Goldstein was a Jewish immigrant whose family fled the pogroms of Russia in 1906, and his own sense of dislocation may have influenced the way he saw Puerto Ricans, not as exotics, but as people torn between cultural identities living in tenements and out on the street — much as he did when he arrived on New York’s Lower East Side.

One of the noteworthy aspects of Goldstein’s images is the lack of self-consciousness of his subjects. There is relatively little mugging for the camera, and many seem unaware of the photographer at all. It’s hard to imagine approaching people on the street in a similar way today. Street portraiture is still doable – look at the work of Katy Grannan and Robert Bergman – but it requires different strategies. Goldstein’s compositions were straightforward, usually symmetrical, a single figure at the center, or standard cinematic 2 and 3-shots. He was working with a Rolleiflex, a square framed camera often held at waist level, a bit slower to handle than 35mm, which was the format employed by most of his Photo League compatriots. But in making his prints, many of the images were cropped to create horizontals or verticals.

While Goldstein focused on portraiture, there are three basic categories of images in East Harlem: people on stoops, children playing, and broader views of street activity, offering glimpses of the overall urban landscape. There is no doubt that postwar East Harlem was a poor neighborhood with rundown housing, but in Goldstein’s pictures, there is a strong sense of community, a community that spilled out into the street to gather, play music, escape the summer heat, and find freedom from cramped tenement rooms. That community was, to a great extent, destroyed by urban renewal, which replaced the tenements with towers, disrupting the urban fabric and hastening the decline of the remaining 19th and early 20th century buildings.

Several of Goldstein’s photographs show buildings being demolished against a backdrop of tall brick housing projects. Those sterile buildings continue to dominate the neighborhood today. Only a few images in the book are absent of people, but they are among the most poignant – one showing a shattered window and stenciled lettering indicating that the building has been slated for demolition, and the last image in the book, a pushcart laden with flowers with a sign printed “El Chico – Florist.” For me, that image evokes a fleeting moment in time and a fragile beauty lost. We should be grateful that Leo Goldstein’s boxes of prints were saved. 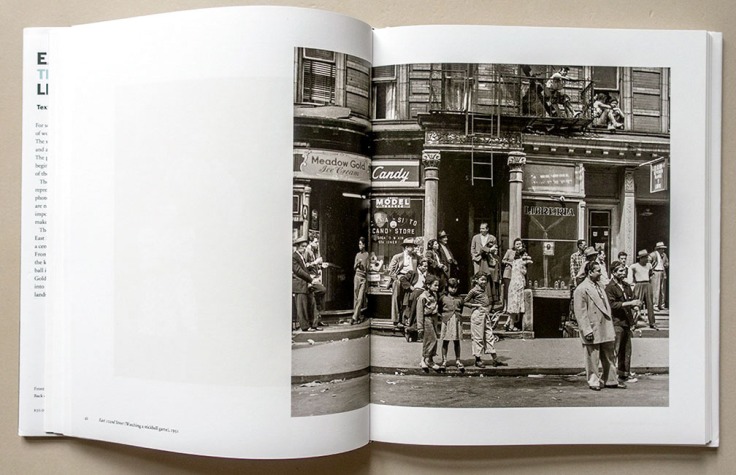 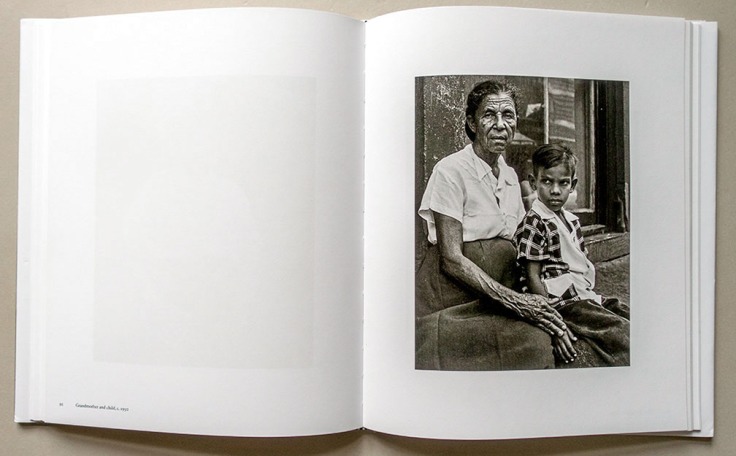 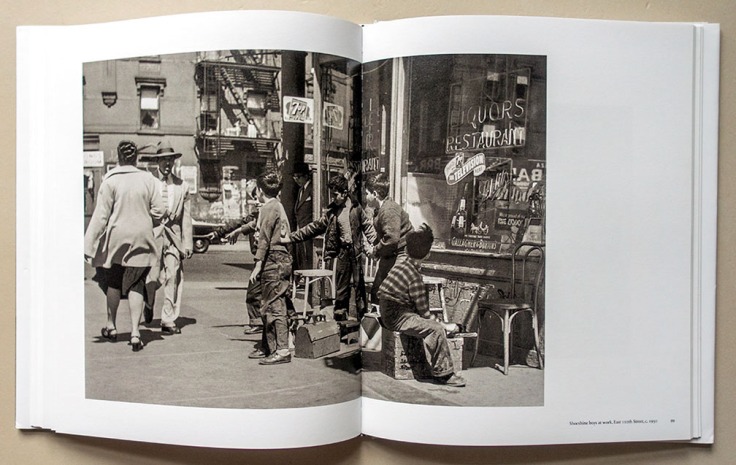 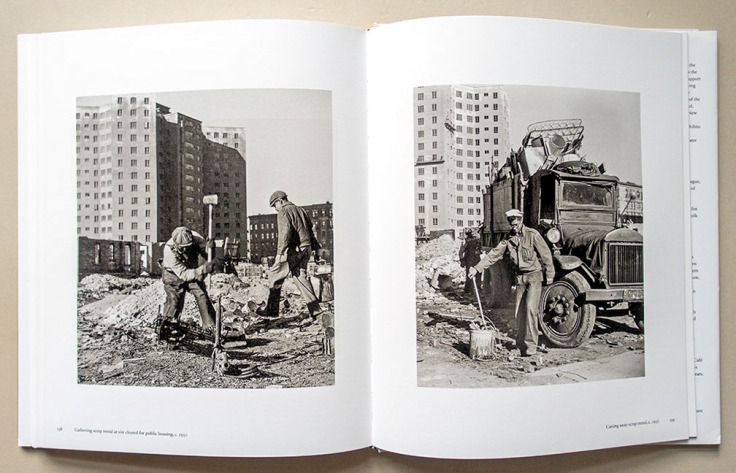 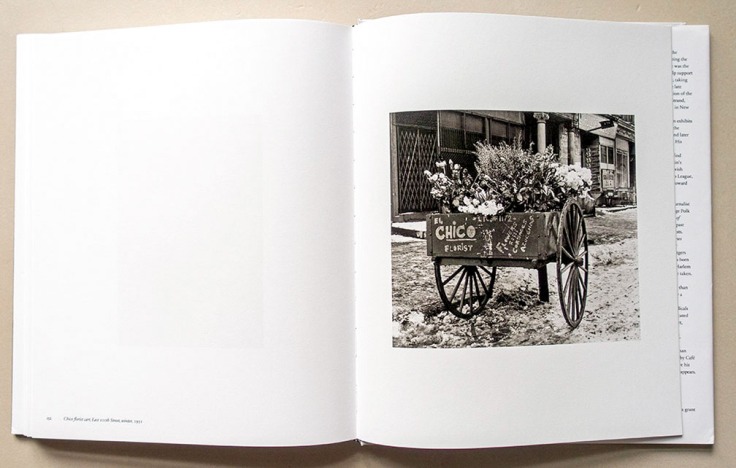