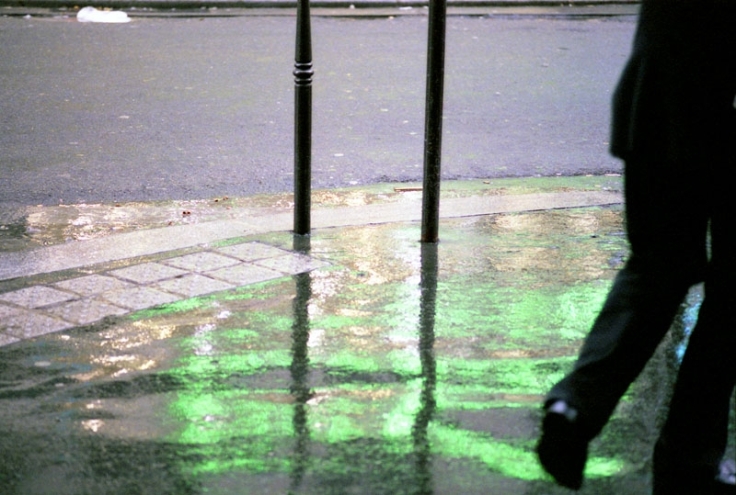 William Eggleston’s recent book Paris, published by Steidl and commissioned by Foundation Cartier, is a collective body of work that comprises his oeuvre of color drawings and recent Paris photographs. Similar to Ben Shahn, Charles Scheeler, Diego Rivera, Man Ray, Robert Rauschenberg and Ed Ruscha, Eggleston has reached out beyond photography to express his creative talents.

We know mostly of Eggleston’s photographs, but from the dating on one of the drawings included in this book, we can determine that Eggleston has been working with the drawing medium since 1968. It is interesting to speculate as to how one medium may have influenced the other for Eggleston. As an example, the earlier photographs by Shahn and Scheeler seem to have had an influence on how these two artists subsequently worked their framing, pictorial space, mass & line quality in their subsequent paintings.

The Paris photographs that Eggleston made of graffiti or his tight framing in conjunction with a longer lens to compress the pictorial space are visually similar in style to his drawings. The subjects he photographs are framed to create similar vibrant color masses and lines as his drawing, abstracting reality into basic graphic components.

Eggleston’s colored drawing and watercolor paintings are very abstract, without any direct connotation to a discernable subject. These small works are similar to the paintings of the Abstract Expressionist period, most notably Jackson Pollack. They have an emotional content derived by the bright transparent hues, which are very saturated.  These works are principally colored drawings, with a few composed of transparent washes of watercolor paint. His marks are direct strokes of color without any visible use of an under drawing to create structure. It appears that he initially frames his space with a few strokes of color and then proceeds to build the subsequent internal space with layers of thin washes of vibrant color.

To create these small gems, he utilizes a broad spectrum of portable drawing tools that include transparent markers, ink pens, pencil, crayons, translucent watercolor and colored pencils. Some are his drawings are loaded with dense color, while others, notable his earlier drawings, have marks and strokes that are sparsely placed across the page, almost delicate, with large masses of open space to allow the medium to come through. Predominately, his drawings are constructed on either a white or creamy medium; Eggleston will also draw on top of previously printed material with his markers and pens, such as layer them over a newspaper advertisement.

His abstract drawings can be read as poems, as the subject matter lends itself to an indirect correlation to the physical world. Similar to the earlier Abstract Expressionist period, these drawings have a quality of spontaneity, an emotional response to an unconscious feeling that is acted on the flat surface of the paper. Both his drawings and photographs share this similar quality of intensity.

With the pairing of the drawings and photographs, I note how they build on the same complementary color palate. Photographers work with the predetermined color palate of the urban landscape, using framing to careful cull out the result image. Or perhaps allow a new element, such as including the pattern or color of clothing of a passing person, to complete the color composition. Painters on the other hand can control their color pallets, needing to careful select their color schemes to convey their intent.

Thus I wonder, much like what came first, the chicken or the egg, on the interrlationship of his drawings and photographs.  Are the drawings a response to specific photographs? Or did a recent drawing increase his awareness, such that while moving through the urban landscape, a spontaneous photographic response was triggered to a visually related scene? Or did the drawing stimulate the search for a photographic equivalent?

Eggleston’s photographs are constructed like spontaneous glances; partial views of what might be consider a traditional subject, creating color abstractions of lines, patterns and mass. Trees, pipes, people, walls, garbage, décor, wall paper, display windows are bisected and truncated, with edges and lines following out of the photographs borders. These images seem to be created by a restless and nervous energy.

With these drawings, paintings and photographs, Eggleston shows a interesting handling of these mediums and offers an insight as to how influential the period of Abstract Expressionism is to his photographic process.

I also want to note that is a beautiful book. It has a black linen hardcover with an inlaid photograph on the front cover. The paper has a nice weight and heft to it and it is a delight to hold and read. 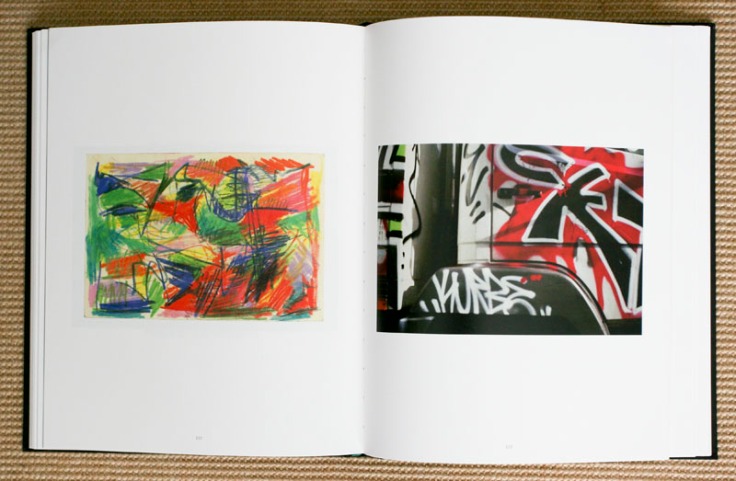 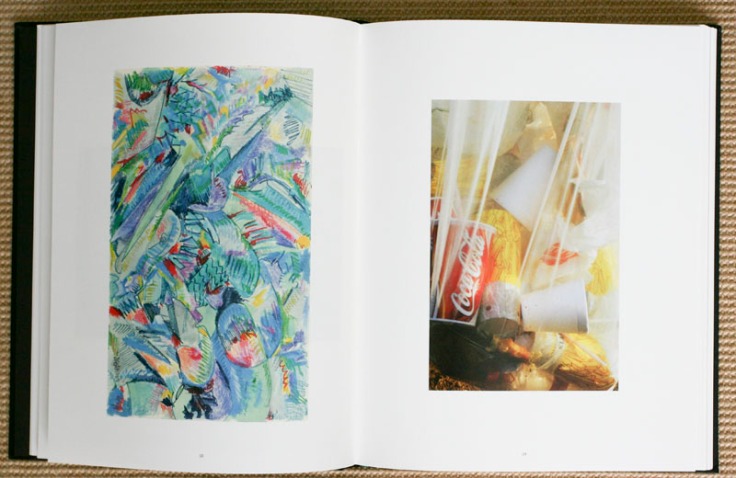